Ms Pelosi surprised many House Democrats on Wednesday night after the House impeached Mr Trump when she said she would delay naming impeachment managers - who would argue the House case in the Senate - until the Senate lays out its procedures for the trial.

"When we see what they have, we'll know who and how many we will send over," she said at a news conference on Thursday. Ms Pelosi cast it as a procedural matter and cited the Senate's ability to come up with a bipartisan trial plan after former president Bill Clinton was impeached.

Mr McConnell, Mr Trump and their Republican allies taunted Ms Pelosi over the delay. Mr McConnell said on the Senate floor that Ms Pelosi and House Democrats "may be too afraid to even transmit their shoddy work product to the Senate".

Mr Trump tweeted as Ms Pelosi spoke on Thursday morning, saying that "Pelosi feels her phony impeachment HOAX is so pathetic she is afraid to present it to the Senate".

Senate Democratic leader Chuck Schumer, who is set to meet Mr McConnell later on Thursday, has been pressing the Kentucky Republican to agree to let Democrats call as witnesses four Trump administration officials who the President blocked from participating in the House impeachment inquiry.

After meeting later with Ms Pelosi, Mr Schumer said he and the speaker are "on the same page. We both want a fair trial".

Mr McConnell and other GOP senators have been indicating they want a quick trial, with arguments presented by the House managers and Mr Trump's counsel without witnesses. Mr McConnell was giving no ground.

"It's beyond me how the speaker and Democratic leader in the Senate think withholding the articles of impeachment and not sending them over gives them leverage," he told reporters at the Capitol. "Frankly, I'm not anxious to have the trial."

The House had always planned to wait until after a Senate vote scheduled for Thursday on spending Bills before notifying the Senate of impeachment, a step that would force the Senate to drop all other business and take up an impeachment trial. Ms Pelosi didn't specify what conditions or terms she wanted to see in the Senate trial procedures.

It's unclear how long she is willing to hold back the formal notification to the Senate that Mr Trump has been impeached or the naming of Democratic lawmakers who would serve as managers for the House's impeachment.

The House will need to pass a resolution naming the impeachment managers and appropriating money for the process before the Senate can begin its trial. The resolution won't get a vote before lawmakers leave Washington for the holidays, according to a senior Democratic aide. 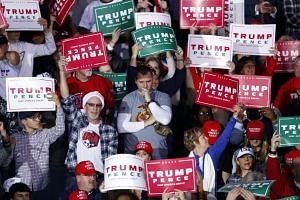 After his historic impeachment, the moment belongs to Trump

'Civics lesson' or 'sham trial'? Key moments in the US House impeachment debate

Although 10 minutes of floor debate is now required before passage, the House could take this procedural step while lawmakers are away if no member objects. Or it could wait until members return in the first full week of January, the aide said.

House Judiciary Committee Chairman Jerrold Nadler told reporters he doubts the articles would be held for long, but Mr McConnell needs to provide a fair proceeding in accordance with the oath senators take at the start of the trial.

"Given what Senator McConnell has said about how he is going to be working hand-in-glove with the White House defence counsel, I don't see how he can take that oath," he said.

The idea of a delay surfaced from rank-and-file Democrats on Wednesday, who began discussing it with Democratic leaders as the day went on.

"At this point, her decision to withhold sending them over is meritorious," Democratic Representative Jackie Speier said on Thursday. "I think this gives the House leverage to make sure this isn't a kangaroo court."

"If the Speaker ever gets her house in order, that mess will be dumped in the Senate's lap," he said on the Senate floor. "If the nation accepts this, presidential impeachments may cease being a once-in-a-generation event."

In response, Mr Schumer accused Mr McConnell of hypocrisy for accusing House Democrats of being motivated by partisan rage when the majority leader himself declared he will not be impartial and for complaining about a rushed impeachment process.