WASHINGTON (AFP) - Ms Nancy Pelosi, already the most powerful woman in United States political history, has just launched an extraordinary and turbulent process which - if it fulfils its goal - would oust a sitting American president.

After resisting fellow Democrats' calls to impeach Mr Donald Trump from the moment she became Speaker of the US House of Representatives in early January, the tough-as-nails lawmaker changed course on Tuesday (Sept 24), announcing an "official impeachment inquiry" by the House into her political nemesis.

Should it succeed, Ms Pelosi's reputation as a master political tactician will be sealed.

If it fails - and the likelihood that Mr Trump is not ousted is high, given that his Republicans control the Senate - her politically perilous gambit has the potential to antagonise voters ahead of the 2020 presidential election.

Twelve years ago, Ms Pelosi made history as the first woman elected House Speaker. Once again wielding the gavel, her political comeback is complete.

The 79-year-old has spent the year seeking to keep Mr Trump in check, challenging him on immigration policy, the Budget, gun violence and more.

But she has also tamped down the impeachment groundswell, saying such a procedure should be launched only if the American people support it, and arguing that the best way to remove the Republican commander-in-chief was at the ballot box.

"I've tried to avoid the situation that we're in now, because it was very divisive for the country," Ms Pelosi told a forum on Tuesday just before her bombshell announcement.

Her calculus changed. Most House Democrats back impeachment, and the number has only grown following revelations of a whistle blower's complaint that is believed to centre around actions by Mr Trump, including his call to the President of Ukraine.

"The President must be held accountable," she said in announcing the inquiry. "No one is above the law."

Ms Pelosi is the nation's third-most senior official and a great survivor in American politics.

To reclaim the Speaker's gavel she lost nine years ago, the California power broker diligently plotted a remarkable comeback that has impressed allies and opponents alike.

In her opening speech to a new Congress, she said she was "particularly proud" to take the gavel with a record number of women lawmakers on Capitol Hill.

That she is the new speaker in the #MeToo era - and the opponent-in-chief to a brash President accused by multiple women of abuse or harassment over the years - reflects the increasing influence of women on the nation's political process.

Ms Nancy Patricia D'Alesandro was born in March 1940 in Baltimore to a political family with Italian roots. Both her father and brother were mayors of the East Coast port city.

After studying political science in Washington, she moved with her husband to San Francisco, where they raised five children.

She rose through the ranks to first become minority leader for the Democrats in 2003. 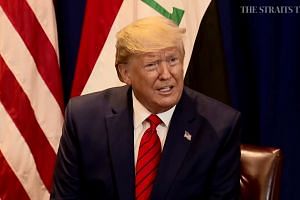 Ms Pelosi assumed the speakership for the first time in 2007, during the presidency of Mr George W. Bush. She was a strong opposing force to the Republican leader, and her role as a check on Mr Trump has been similar.

But at times, she has struggled to tightly corral her own caucus, notably a group of first-term progressives who have clashed bitterly with Mr Trump, and occasionally squabbled with Ms Pelosi herself.

Occasionally, they leaned on leadership to move more quickly against Mr Trump, but Ms Pelosi's methodical approach won out.

"She wants to make sure that we are moving on impeachment and moving swiftly," Ms Omar said. "And I am totally on board for that."

Earlier this year, Ms Pelosi threaded a political needle, standing up to Mr Trump when needed but also showing that her party is capable of working with the President to pass legislation.

But that cooperation frayed. Ms Pelosi and the Democratic leadership have hamstrung large parts of Mr Trump's agenda, ranging from proposed new tax cuts to building a wall on the US-Mexico border.

Certainly with the impeachment inquiry, any goodwill between Ms Pelosi and Mr Trump has evaporated.

Ms Pelosi is unquestionably among the savviest political leaders of her generation. She shepherded then-President Barack Obama's signature healthcare law through the House to its contentious, historic passage in 2010.

Perhaps for that reason, she is vilified by Republicans.

Conservatives depict Ms Pelosi, the wife of an investment millionaire, as the embodiment of leftist elitism.

She is accused of everything from wanting to raise taxes for middle-class families to supporting illegal immigration.