The House passed legislation to implement the US-Mexico-Canada Agreement (USMCA) 385-41, with 38 Democrats, two Republicans and one independent member voting no.

The House vote sends the measure to the Senate, but it is unclear when the Republican-controlled chamber will take it up.

Senate Republican leader Mitch McConnell has said that consideration of the measure would likely follow an impeachment trial in the Senate, expected in January.

The USMCA trade pact, first agreed upon in September 2018, will replace the 1994 North American Free Trade Agreement (Nafta). Mr Trump vowed for years to quit or renegotiate Nafta, which he blames for the loss of millions of US factory jobs to low-wage Mexico.

Ms Pelosi said she was not concerned about Democrats handing Mr Trump a political victory on the USMCA, as they are trying to remove him from office.

"It would be a collateral benefit if we can come together to support America's working families, and if the President wants to take credit, so be it," she said during House floor debate before the vote.

The changes negotiated by Democrats, which include tighter environmental rules, will also set up a mechanism to quickly investigate labour rights abuses at Mexican factories. They have earned the support of several US labour unions that have opposed Nafta for decades.

US Trade Representative Robert Lighthizer made a concession by dropping a requirement for 10 years of data exclusivity for biologic drugs, a provision that Democrats feared would keep drug prices high and that they called a "giveaway" to big drugmakers. 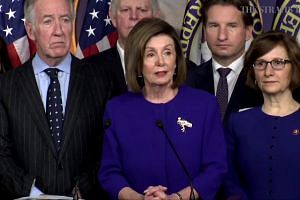 Some of the most ardent trade sceptics in Congress have voiced support of the deal, including Representative Debbie Dingell, who represents an autoworker-heavy district in south-eastern Michigan. Ms Dingell said in television interviews that she backed the Bill, even though she was sceptical it would bring auto jobs back to Michigan.

Representative Ron Kind, a pro-trade Democrat from Wisconsin, one of the top dairy-producing states, praised new access to Canada's closed dairy market under the USMCA.

"A no vote is a return to the failed policy of the old Nafta, the status quo, rather than this more modernised version," Mr Kind said in floor debate.

The agreement modernises Nafta, adding language that preserves the US model for Internet, digital services and e-commerce development, industries that did not exist when Nafta was negotiated in the early 1990s. It eliminates some food safety barriers to US farm products and contains language prohibiting currency manipulation for the first time in a trade agreement.

But the biggest changes require increased North American content in cars and trucks built in the region, to 75 per cent from 62.5 per cent in Nafta, with new mandates to use North American steel and aluminium.

In addition, 40 per cent to 45 per cent of vehicle content must come from high-wage areas paying more than US$16 an hour - namely the US and Canada. Some vehicles assembled in Mexico mainly with components from Mexico and outside the region may not qualify for US tariff-free access.

The US Congressional Budget Office estimated earlier this week that automakers will pay nearly US$3 billion more in tariffs over the next decade for cars and parts that will not meet the higher regional content rules.