The Democratic chairs of six House committees, in a letter to Barr on Monday (March 25), said the attorney general's four-page summary of the Mueller report "is not sufficient for Congress, as a coequal branch of government," to examine President Donald Trump's conduct.

"Congress must be permitted to make an independent assessment of the evidence regarding obstruction of justice," said the committee leaders. They said they also want to examine the evidence on Trump and Russia's interference in the 2016 presidential election.

They didn't address what actions they might take if Barr refused or missed the deadline, though they said they were prepared to discuss whether some materials should be withheld.

They added in the letter that they had no reason to question Mueller's conclusions, "but it is vital for national security purposes that Congress be able to evaluate the full body of facts and evidence collected and evaluated by the special counsel, including all information gathered of a counterintelligence nature." 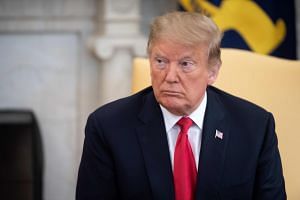 The sweeping demand could set up a show-down between Congress and the Justice Department - as part of the executive branch of government - over what parts of Mueller's investigative findings, including highly sensitive law enforcement and classified material should be released.

Maxine Waters, the chairman of the Committee on Financial Services, also signed the letter and said that Democrats want to learn of Mueller's investigation, "what work went into it, what was considered, what was not considered, and why?"

After the letter was released, Cummings said he had "full faith and confidence in Mueller," but pointed out that the special counsel did not reach a conclusion on whether Trump obstructed justice. Barr found that there wasn't enough evidence to form an obstruction case.

Cummings said he believed that "what Mueller was saying by not making a finding with regard to obstruction was that he wanted the Congress to take a look at it" and see if it can reach a decision.