WASHINGTON (REUTERS) - The United States slapped sanctions on Russian individuals and entities for US election meddling and cyber attacks but put off targeting oligarchs and government officials close to President Vladimir Putin, prompting lawmakers in both parties to say President Donald Trump needs to do much more.

With the United States under pressure to act, the steps announced by the US Treasury Department represented the most significant taken against Moscow since Trump assumed office in January 2017.

Along with imposing sanctions on 19 individuals and five entities including Russian intelligence services, Trump’s administration blamed Moscow for a campaign of cyber attacks stretching back at least two years that targeted the US power grid including nuclear facilities.

The United States also joined Britain, Germany and France in demanding that Russia explain a military-grade nerve toxin attack in England on a former Russian double agent, and Trump said “it certainly looks like the Russians were behind” the incident.

But congressional critics called the administration’s action a woefully inadequate retaliation for Russia interference in the 2016 US election and other actions.

“The sanctions today are a grievous disappointment and fall far short of what is needed to respond to that attack on our democracy let alone deter Russia’s escalating aggression, which now includes a chemical weapons attack on the soil of our closest ally,” said Adam Schiff, top Democrat on the House of Representatives Intelligence Committee.

Donald Trump on spy poisoning: 'Looks like the Russians were behind it'

Trump has faced fierce criticism in the United States for doing too little to punish Russia for the election meddling and other actions, and Special Counsel Robert Mueller is looking into whether Trump’s campaign colluded with the Russians, an allegation the president denies.

Sixteen of the Russian individuals and entities sanctioned were indicted on Feb 16 as part of Mueller’s criminal investigation.

“They didn’t hit Putin’s power structure and they didn’t team up with Europe,” Brian O’Toole, a senior fellow at the Atlantic Council think tank and a former senior adviser at the Treasury Department’s Office of Foreign Assets Control, said of the administration’s actions.

A senior administration official told Reuters that Trump, who campaigned on warmer ties with Putin, has grown exasperated with Russian activity. “A classic bully,” the official said of Putin.

White House spokeswoman Sarah Sanders, asked if Russia is a friend or foe, told reporters, “Russia is going to have to make that determination. They’re going to have to decide whether they want to be a good actor or a bad actor.”

Thursday’s announcement marked the first time that the US government stated publicly that Russia had attempted to break into the American energy grid, which US security officials have longed warned may be vulnerable to debilitating cyber attacks from hostile adversaries. 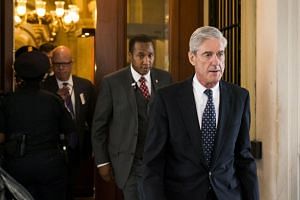 The Treasury Department said the sanctions were also meant to counter cyber attacks including the NotPetya attack that cost billions of dollars in damage across Europe, Asia and the United States. The United States and Britain last month blamed Russian military for that attack.

Trump has frequently questioned a January 2017 finding by US intelligence agencies that Russia interfered in the 2016 campaign using hacking and propaganda in an effort eventually aimed at tilting the race in Trump’s favor. Russia denies interfering in the election.

But Treasury Secretary Steven Mnuchin was unequivocal in saying that Thursday’s action by his department “counters Russia’s continuing destabilizing activities, ranging from interference in the 2016 election to conducting destructive cyber-attacks.”

“Putin constantly attacks our friends. So, President Trump, are you going to get smart about the threat Russia poses to the United States and our allies?” Senate Democratic leader Chuck Schumer asked.

Mnuchin said there would be additional sanctions against Russian government officials and oligarchs “for their destabilising activities.” Mnuchin did not give a time frame for those sanctions, which he said would sever the individuals’access to the US financial system.

Democratic Senator Robert Menendez said he was glad to see the administration act but noted that Democratic former President Barack Obama’s administration had already imposed sanctions on many of the people and entities targeted on Thursday.

A senior administration told reporters on a conference call that Russian actors infiltrated parts of the US energy sector.

Trump told reporters during a White House event with Irish Prime Minister Leo Varadkar that “it certainly looks like the Russians were behind” the use of a nerve agent to attack Sergei Skripal, a former Russian double agent in England.

Trump called it “something that should never, ever happen, and we’re taking it very seriously, as I think are many others.”

The new sanctions include Russian intelligence services, the Federal Security Service (FSB) and Main Intelligence Directorate (GRU), and six individuals working on behalf of the GRU.

Thursday’s action blocks all property of those targeted that is subject to US jurisdiction and prohibits American citizens from engaging in transactions with them.

Russian businessman Evgeny Prigozhin, one of those indicted by Mueller and hit with sanctions on Thursday, said in comments cited by RIA news agency that he already had been hit with US sanctions “maybe three or four times – I’m tired of counting.”

“I’m not worried by this,” Prigozhin was quoted as saying.“Except that now I will stop going to McDonald’s.”