EL PASO, UNITED STATES (WASHINGTON POST) - The nation's top border official warned that the United States immigration enforcement system along the nation's southern boundary is at "the breaking point", and said on Wednesday (March 27) that the authorities are having to release migrants into the country after cursory background checks because of a crush of asylum-seeking families with children.

Mr Kevin McAleenan, the commissioner of US Customs and Border Protection (CBP), said that for the first time in more than a decade, his agency is "reluctantly" performing direct releases of migrants, meaning they are not turned over to Immigration and Customs Enforcement (ICE), are not detained, and are allowed to leave with just a notice to appear in court at a later date.

He said that this is a "negative outcome" but it is "the only current option we have" because of overcrowding at detention facilities as Central Americans stream to the border knowing they will be able to gain entry with asylum claims.

The number of migrant families coming to the border has reached new highs month after month, a trend that dramatically accelerated after US President Donald Trump announced that parents and children would no longer be separated, reversing course on his "zero tolerance" crackdown.

Mr McAleenan said the agency detained more than 4,100 migrants on Tuesday, the highest one-day total at the border in more than a decade, and agency projections have border apprehensions on pace to exceed 100,000 this month - an increase of more than 30 per cent. By comparison, at the height of the last border crisis, in May 2014, agents apprehended more than 68,800 migrants that month.

The massive influx of families seeking asylum has strained almost every aspect of US operations on the border, Mr McAleenan said, nowhere more evident than here, along the Rio Grande. Crossings have been overwhelmed with hundreds of migrants seeking asylum daily, Border Patrol stations are crammed and have no space for detainees, the immigration court system is backed up with hundreds of thousands of cases, and health services are having to triage batches of patients who have a variety of ailments and communicable diseases.

"That breaking point has arrived this week," Mr McAleenan said, standing in front of a border fence. "CBP is facing an unprecedented humanitarian and border security crisis all along our south-west border, and nowhere has that crisis manifested more acutely than here in El Paso." 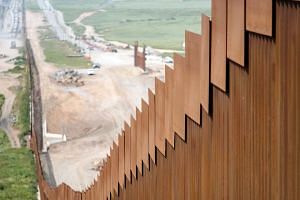 He made an urgent call for Congress to provide additional emergency funding to house and provide medical care to migrants.

But he also urged lawmakers to close legal "vulnerabilities" that make it nearly impossible to detain migrant families and unaccompanied minors long enough to determine whether they have a valid asylum claim.

He urged Congress to expand detention space, allow for the detention of families for up to eight weeks instead of the current three weeks, and allow US agencies to swiftly deport Central American families and unaccompanied minors who lose their immigration cases.

"If they don't have a valid claim, we'll repatriate," Mr McAleenan said. "If they do, they'll be released with the certainty that they have asylum with the ability to plan, to invest in a business, to make these choices for schools. Right now, they don't have that. They live with uncertainty for years at a time because the system is broken and overwhelmed."

CBP officials say they are particularly alarmed by the soaring number of unaccompanied juveniles in crowded detention cells because Health and Human Services (HHS) can't place them in shelters fast enough. CBP officials said they have 1,350 underage migrants in holding cells without a parent - and 20 per cent are 12 years old or younger.

Mr McAleenan said the overwhelming numbers and "inadequate capacity to detain families and children at ICE and HHS" is at the heart of the crisis.

By law, the minors should remain in CBP custody for the shortest amount of time as possible and not in excess of 72 hours.

But CBP officials privately acknowledged on Wednesday that they are keeping them in custody longer, in potential violation of a court order, because HHS doesn't have anywhere to put them, a situation leaving CBP with "no legal options". The agency is reassigning agents to respond to and care for children, including US agents who were sent south from the Canadian border this week.

But Ms Evelyn Stauffer, a HHS spokesman, said the agency "continues to receive children referred to our care from the Department of Homeland Security and place them in an appropriate shelter as safely and quickly as possible". She said the agency could expand emergency facilities to handle an influx, as they also did under the Obama administration. There are 12,000 minors currently in HHS custody.

Near where Mr McAleenan spoke on Wednesday, an improvised holding pen beneath a highway overpass is serving as a processing centre. US agents have been interviewing hundreds of parents and children in a dusty carpark. Just before the commissioner began speaking, a group of nine parents and children from El Salvador and Panama traversed the Rio Grande, and agents led them to the processing centre on foot.

Mr McAleenan's plea for help reflects the growing desperation among Homeland Security officials faced with a border influx that is on pace to be the largest in more than a decade, led by Guatemalan and Honduran asylum seekers who arrive with children and surrender to US agents. Mr McAleenan said his agency currently has more than 13,000 migrants in its custody.

"A high number is 4,000," he said. "Six thousand is crisis level. Thirteen thousand is unprecedented."

Some of the migrants have been seriously ill, including infants with high fevers, a two-year-old suffering seizures in the desert, a 19-year-old woman with a congenital heart defect who needs emergency surgery and a 40-year-old man suffering multi-organ failure. Others have lice, the flu and chickenpox.

"We are doing everything we can to simply avoid a tragedy in a CBP facility," Mr McAleenan said. "But with these numbers, with the types of illnesses we're seeing at the border, I fear that it's just a matter of time."

He blamed the surge on smugglers and US laws that he said encourage illegal migration because migrants are virtually guaranteed to be released in the US.

"There's no questioning why this is happening," he said.

The amount of resources needed to handle the surge is diverting Border Patrol agents from other duties, including security work aimed at drug interdiction and interior checkpoints.

Ms Guadalupe Correa-Cabrera, an associate professor of policy and government at George Mason University who researches migration, smuggling and criminal organisations, said it is risky to divert Border Patrol agents from their main security mission.

"They're supposed to look for real threats, to look for drug traffickers," she said. "Children and women are not a threat to the United States of America."

While Mr McAleenan was emphasising the need for more resources and legal authority to keep people from the US interior, advocacy groups say the Trump administration should instead treat the migrants as refugees and invest in foreign aid. Migrants are streaming out of Central America for a complex set of reasons - including drought, poverty, violence and political instability - problems that will persist regardless of US border policy. 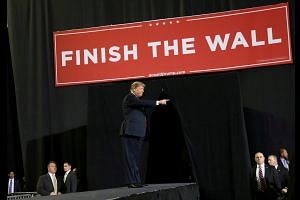 Trump aide predicts 'hundreds of miles' of border wall by 2020

As migrant numbers surge upward, thousands more Central Americans are waiting in Mexico, at shelters in Ciudad Juarez, and US officials say they probably will cross the river in coming days and weeks.

Though Border Patrol apprehensions remain below their annual peak of 1.6 million in 2000, the nature of the increasing migration flows has shifted dramatically, and that shift is driving the alarm.

In prior eras, most of the migrants were adult men who could be easily deported to Mexico; now, many of those attempting to cross the border are asylum-seeking Central American families and, to a lesser degree, minors travelling on their own. Because those seeking asylum have a legal right to have their cases evaluated, most families are released into the US to await hearings in clogged immigration courts, a process that can take months or years.

Mr McAleenan's appeal came amid heated debate in Congress over the border situation. President Trump declared a national emergency in February after a government shutdown failed to secure the funding he wanted for construction of a border wall. Congress sent Mr Trump a bipartisan resolution that sought to nullify his declaration, but he vetoed it. On Tuesday, a House vote seeking to override the veto failed.

"The Trump administration has withheld the money Congress appropriated to improve conditions in the Northern Triangle countries, wasted funds on an ineffective wall and refused to work with Congress on a comprehensive solution," Mr Drew Hammill, a spokesman for Ms Pelosi, said in a statement. "Every action this administration has taken over the past two years has increased the numbers of families, women and children coming to the border."

The migrants arriving in El Paso are crossing the Rio Grande, arriving in a place where the US already has formidable, modern border barriers. By surrendering to agents on US soil - the strip of land between the river and the tall US fencing - the migrants can assert their legal right to seek asylum. Border Patrol holding cells in the Rio Grande Valley of South Texas also are overcrowded, as are facilities in Arizona.

The most dangerous overcrowding is here in the El Paso area, where Border Patrol stations are at 300 per cent to 400 per cent capacity. Most parents who arrive with a child are issued an appointment with an immigration judge. But agents are so overwhelmed by the volume that they often do little more than a cursory screening, officials said.

CBP is supposed to be a fast-track system that books migrants into custody, checks their fingerprints and sends them to other agencies. Families and single adults are referred to ICE, which conducts additional checks and detains or releases them to await a court hearing. Families can be detained, but space is limited to roughly 3,000 people.

The border security compromise Democrats reached with President Trump last month includes US$415 million (S$560 million) to improve medical care and detention conditions for families and children in US custody, including the construction of a new child-appropriate processing centre in El Paso. But that facility is not likely to open for at least six months, CBP officials say.

Mr Gil Kerlikowske, CBP commissioner under the Obama administration during the border surge of 2014, when officials were pitching emergency tents and holding large flows of unaccompanied minors in a converted warehouse near McAllen, Texas, cautioned on Wednesday that the latest migration projections are "an amazing number".

"It really is a significant issue," said Mr Kerlikowske, who headed the agency from March 2014 until January 2017. "Resources and space are going to need to be devoted to dealing with this."

Department of Homeland Security Secretary Kirstjen Nielsen met senior Mexican officials in Miami on Tuesday for unannounced talks, telling her counterparts that cross-border trade and commerce are likely to suffer as more CBP officers are pulled away to cope with the migration surge.

CBP is preparing to temporarily reassign 750 blue-uniformed officers from its Office of Field Operations to help the Border Patrol, according to a senior DHS official, and Ms Nielsen told Mexican interior minister Olga Sanchez Cordero that move likely will produce longer wait times for trucks and vehicles seeking to cross.