WASHINGTON (WASHINGTON POST) - US authorities have seized a North Korean ship allegedly used to sell coal in violation of international sanctions, the first such move by Justice Department officials as they ratchet up enforcement efforts against the regime in Pyongyang.

Justice Department officials Thursday confirmed that the vessel, the Wise Honest, was approaching US territorial waters in American Samoa, in coordination with the US Marshals Service and the Coast Guard.

“This sanctions-busting ship is now out of service,” Assistant Attorney General John Demers said in announcing the seizure.  The 17,601-ton, single-hull bulk carrier ship is one of North Korea’s largest, and US authorities said it was part of a network of  North Korean vessels illicitly shipping coal from that country and bringing back heavy machinery in violation of UN and US sanctions.

Last year, Indonesian authorities stopped the ship on suspicion of violating sanctions. More recently, they allowed the ship to offload its coal cargo onto another vessel, which departed for Malaysia.

After UN monitors raised alarms, Malaysia denied that ship, the Dong Thanh, entry to one of its ports, said Hugh Griffiths, who until last month led a team of UN monitors tracking North Korea sanctions.

The Dong Thanh is anchored just off the coast of Malaysia, “unable to unload its cargo of coal anywhere,” Griffiths said.

The announcement came just hours after North Korea launched a pair of short-range missiles, the regime’s second such test in the past week, and marked an escalation of US government pressure on Pyongyang – even as President Trump has spoken glowingly about North Korean leader Kim Jong Un.

Geoffrey Berman, the US attorney in New York whose office filed the complaint against the Wise Honest, said that “there’s no connection at all” between the missile strikes and the vessel’s seizure.

Separately on Thursday, US military officials conducted a scheduled launch of an intercontinental ballistic missile from an Air Force facility in California. It was the second test of the US Minuteman III missile this month and the third this year, though the Air Force maintains that such activity is scheduled years in advance and not in response to world events.

Trump told reporters Thursday that the US-North Korea relationship “continues, but we’ll see what happens. I know they want to negotiate. They’re talking about negotiating, but I don’t think they’re ready to negotiate.”

The papers filed in federal court in New York said shipments by the Wise Honest and other North Korean vessels “provide a critical source of revenue” for North Korea’s government and companies based there.

The court filing says payments for improvements to the Wise Honest were conducted via US banks, also in violation of sanctions.

Experts have said that to evade sanctions, North Korea conducts its illicit trading with a fleet of ghost ships that have false names painted on their hulls, steal identification numbers from other vessels and execute their trades via ship-to-ship transfers at sea to avoid prying eyes at ports. 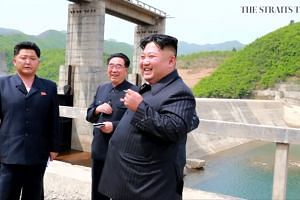 US says door to dialogue remains open for North Korea

'Missiles like these will start the war': North Korea tests showcase growing capability

Demers said the United States would like to seize other ships used by North Korea to violate sanctions.  In the case of the Wise Honest, a globe-trotting North Korean salesman arranged the 2018 shipment by holding meetings at North Korea’s embassy in Jakarta, then paid an Indonesian broker through bank transfers facilitated by JPMorgan Chase, according to bank documents and other evidence gathered by sanctions  monitors.

Until 2017, the ship was partly owned by a Hong Kong-registered company called Vast Win (Hong Kong) Ltd, according to the Justice Department complaint. Vast Win owned a separate ship seized by Egyptian authorities in 2016 for carrying an illicit cargo of 30,000 rocket-propelled grenades manufactured in North Korea, Griffiths said.

Ownership of the Wise Honest was transferred, he surmised, because the arms seizure in Egypt probably rendered Vast Win “no longer a good company to use for North Korean smuggling and vessel ownership.”

Attempts to contact representatives of Vast Win were unsuccessful.

North Korea was vexed by the Wise Honest’s seizure in Indonesia and tried to dispatch Vice Foreign Minister Choe Son Hui to Indonesia earlier this year to inspect the ship and discuss its return, according to a person familiar with the matter.

But the Indonesians told Western diplomats they intended to deny her a visa, and she never visited, the person said.  Indonesian officials did not immediately respond to a request for comment.

UN monitors say sanctions enforcement is dependent on the willingness of other countries to assist in seizures and charges when violations are discovered.

In a separate case last month, a federal judge in the District of Columbia approved a set of subpoenas targeting the financial records of Chinese banks that might show how the North Korean regime has sought to evade sanctions over its nuclear program.

In that case, investigators are looking into whether a Hong Kong corporation may have helped North Korea evade sanctions.