WASHINGTON (REUTERS) - The United States is cutting off aid to the Central American countries of El Salvador, Guatemala, and Honduras, known collectively as the "Northern Triangle", the State Department said on Saturday (March 30), the day after President Donald Trump blasted the countries for sending migrants to the United States.

"We are carrying out the President's direction and ending FY (fiscal year) 2017 and FY 2018 foreign assistance programmes for the Northern Triangle," a State Department spokesman said in a statement.

The State Department said that it would "engage Congress in the process," an apparent acknowledgement that it will need lawmakers' approval to end the funding.

"US foreign assistance is not charity; it advances our strategic interests and funds initiatives that protect American citizens," Menendez said in a statement.

Trump claimed on Friday during a trip to Florida that the countries had "set up" caravans of migrants in order to export them into the United States. 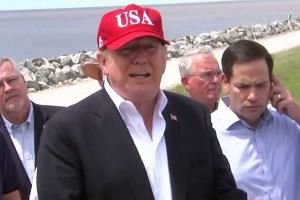 A surge of asylum seekers from the three countries have sought to enter the United States across its southern border in recent days.

Trump also threatened on Friday to close the US border with Mexico next week if Mexico does not stop immigrants from reaching the United States, a move that could disrupt millions of legal border crossings and billions of dollars in trade.