The visit, which AFP could not immediately confirm from official sources, could signify a new phase in the strained relations between the two countries.

According to Al-Akhbar, a Lebanese newspaper close to the pro-Damascus Hezbollah movement, senior US security officials visited Damascus during the last week of June.

"The delegation held a meeting of four hours" with Ali Mamluk, the head of Syria's security services, said Al-Akhbar, which reported that the meeting was facilitated by Emirati and Russian intermediaries.

The Pentagon and State Department did not immediately respond to AFP's requests for comment on the story.

Washington severed ties with the regime of President Bashar al-Assad in the early stages of the deadly conflict that erupted following the government's repression of widespread demonstrations in 2011. 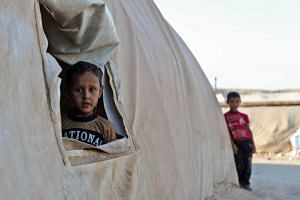 UN invites US and allies for Syria talks next month

Mamluk and Zeitoun fall under US government sanctions over alleged human rights abuses.

The US has provided military and political backing to Assad's opponents, and is also supporting Kurdish militia in northeast Syria as part of a declared campaign to battle the Islamic State in Iraq and Syria (ISIS) extremist group.

Earlier this year, the US led Western strikes against government military infrastructure it said was in response to deadly chemical attacks by the regime.

According to Al-Akhbar, which did not provide the names of the US delegation members, the discussions focused on a possible deal between the two countries.

The US delegation reportedly offered to pull its forces from Kurdish-held territory if Iranian forces pull back from areas near Syria's southern border with Israel, if US companies are guaranteed a share of Syria's oil and if Damascus agreed to share intelligence related to foreign extremists.

According to the Lebanese daily, the Syrian officials suggested any such steps were premature but agreed to keep channels open for possible future contacts.