WASHINGTON (REUTERS) - Top aides to Mr Donald Trump scrambled on Thursday (Sept 6) to deny authorship of an anonymous New York Times opinion column that slammed the United States President’s leadership style and described “a quiet resistance” to him within his own administration.

By early afternoon, eight senior officials had disavowed the piece, including Vice-President Mike Pence, Secretary of State Mike Pompeo and Defence Secretary James Mattis, while hammering the author for writing it and the Times for publishing it.

Mr Trump seethed about the piece and presented it as one more jab from the ranks of disgruntled critics in denial about his presidential successes, even as Washington was consumed with speculation about who wrote it.

First Lady Melania Trump said in a statement on Twitter: “To the writer of the oped – you are not protecting this country, you are sabotaging it with your cowardly actions.”

The article, published on Wednesday, appeared just days after the publication of excerpts from a new book by famed Watergate reporter Bob Woodward that portrays Mr Trump as prone to impulsive decision-making and describes senior aides as sometimes disregarding his instructions to limit what they saw as damaging behaviour.

On Wednesday, Mr Trump, visibly angry at a White House event, called the Times article a “gutless editorial”, and in a later tweet, he suggested it was treasonous.

The Times opinion section said the piece was written by a senior official in the administration and that it was taking the rare step of publishing an anonymous article because disclosing the author’s identity would jeopardise the person’s job.

Senior aides, some of whom have also been denying episodes from Mr Woodward’s book this week, lined up to disavow authorship of the piece, known as an op-ed for its place in the opinion section. 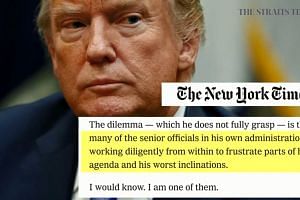 New York Times op-ed by Anonymous: I am part of the resistance inside the Trump administration

All the speculation that's fit to tweet: Who wrote that anonymous New York Times op-ed?

'Resistance' to the US President is not a crisis

Mr Pompeo, previously Mr Trump’s CIA director, said during a trip to India that he was not the author and condemned the Times for publishing it, while Pentagon spokesman Dana White said Mr Mattis did not write the piece.

Homeland Security Secretary Kirstjen Nielsen's spokesman Tyler Houlton said in a statement: “Secretary Nielsen is focused on leading the men and women of DHS (Department of Homeland Security) and protecting the homeland - not writing anonymous and false opinion pieces for the New York Times.”

Ms Nielsen, along with Mr Pence and director of national intelligence Dan Coats were among the favourites on Thursday among political gamblers taking an online stab at guessing the author.

A spokesman for Mr Pence said the Vice-President does not write anonymous opinion columns.

“The @nytimes should be ashamed and so should the person who wrote the false, illogical, and gutless op-ed,” Mr Pence's spokesman Jarrod Agen said on Twitter.

Mr Coats said in a statement that speculation that he or his principle deputy wrote the piece was “patently false”.

The Vice President puts his name on his Op-Eds. The @nytimes should be ashamed and so should the person who wrote the false, illogical, and gutless op-ed. Our office is above such amateur acts.

The opinion piece, and Mr Woodward’s book, which is published next week, follow many news articles during Mr Trump’s 19-month presidency that have depicted turbulence at the White House under his leadership. The former reality TV star has had an unusually high level of staff turnover, and has sometimes been publicly critical of his top aides.

The Times piece slammed Mr Trump’s leadership style as “impetuous, adversarial, petty and ineffective” and called some of his decisions “half-baked, ill-informed and occasionally reckless”. It said some senior officials have been working from within to frustrate parts of Mr Trump’s agenda and protect the country from his worst impulses.

Some of the guessing game over the authorship centred on whether the author worked in the White House or a federal agency. Language in the article, including the use of the unusual word “lodestar”, was the subject of wide online speculation and language searches.

“The media’s obsession with the identity of the anonymous coward is recklessly tarnishing the reputation of thousands of great Americans who proudly serve our country and work for President Trump. Stop,” she wrote on Twitter.

For those of you asking for the identity of the anonymous coward: pic.twitter.com/RpWYPHa6To

Asked by reporters at the United Nations if she wrote the op-ed, UN Ambassador Nikki Haley smiled and said: “No.”

Treasury Secretary Steven Mnuchin “feels it was irresponsible for @nytimes to print this... It is laughable to think this could come from the secretary”, spokesman Tony Sayegh said on Twitter.

.@stevenmnuchin1 is honored to serve @POTUS & the American people. He feels it was irresponsible for @nytimes to print this anonymous piece. Now, dignified public servants are forced to deny being the source. It is laughable to think this could come from the Secretary.

Agriculture Secretary Sonny Perdue said through a spokesman that he was not the author, either.

Mr Trump, a Republican, sought to portray the op-ed as a reflection of yet more anger by Democrats who have never accepted his surprise 2016 presidential election win.

He invoked the term “deep state” - used to portray people with a political agenda working against him – as well as his campaign promise to drain what he has called the corrupt Washington swamp.

“The Deep State and the Left, and their vehicle, the Fake News Media, are going Crazy – & they don’t know what to do,” he tweeted on Thursday morning.

“I’m draining the Swamp, and the Swamp is trying to fight back. Don’t worry, we will win!” he said earlier on Twitter. 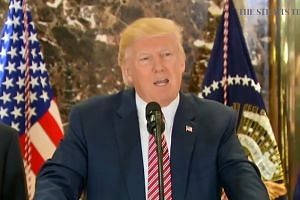 US President Donald Trump's allies come out in force, rejecting narrative of turmoil 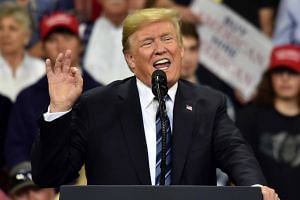 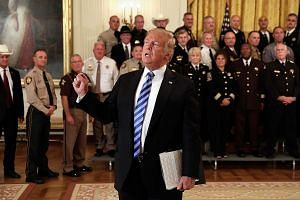 'Resistance' to the US President is not a crisis 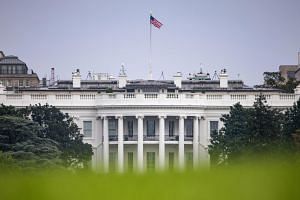 Speculation rife over who wrote op-ed 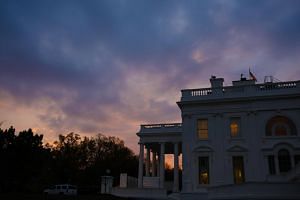 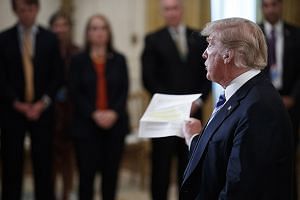 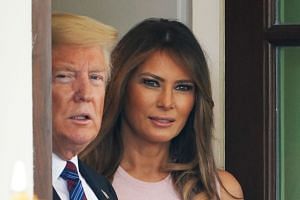 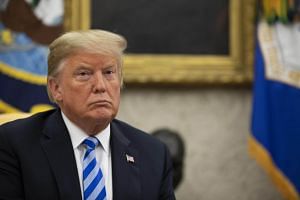 All the speculation that's fit to tweet: Who wrote that anonymous New York Times op-ed?