WASHINGTON - The United States Congress is increasingly throwing its weight behind a Bill backing human rights and democracy in Hong Kong, in a signal of American support for the city's protesters that is certain to rile China.

But while the legislation is a useful expression of US concern about the situation in Hong Kong, it is unlikely to solve the city's problems, said an observer.

The Hong Kong Human Rights and Democracy Act, which is before the Senate and the House, would require the US to annually certify whether Hong Kong is sufficiently autonomous to justify being treated differently from China on matters like trade.

This would pressure China and the Hong Kong government to uphold the city's autonomy, or risk damaging Hong Kong's economic future with the loss of its special status before the American law.

The law would also let the US sanction government officials who undermine Hong Kong's autonomy.

Seven senators co-sponsored the Bill this week, bringing the total number backing it to 16, nearly a fifth of the Senate.

They include prominent lawmakers such as Democratic Senator Kirsten Gillibrand of New York, who ended her presidential bid two weeks ago, and four-term Republican Senator Susan Collins of Maine.

Four Congressmen also co-sponsored the version of the Bill before the House this week, bringing the total number of co-sponsors to 25 out of 535 representatives.

Both versions of the Bill have been referred to the foreign relations, judiciary and financial services committees, a process that could take weeks before they are debated and voted on. Both the House and Senate need to pass a Bill before the President can sign it into law. 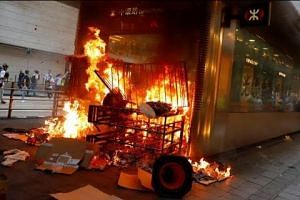 HK protesters trash Central train station, call on US to 'liberate' the territory

China calls out US politicians over HK comments

The Washington Post called on Congress to swiftly pass the Bill, in an editorial that also criticised President Donald Trump's weak response to the protests.

"Now is the time to send a clear message of deterrence to Beijing - and to show Hong Kong's democracy movement that the United States is unambiguously on its side," wrote the paper in an editorial on Wednesday.

China has repeatedly warned the US not to interfere with its internal affairs, while Hong Kong protesters have publicly appealed to Washington to intervene, most recently at a march on the US Consulate last Sunday.

Hong Kong activist Joshua Wong urged Mr Trump to include a clause on human rights in trade negotiations with China, during an event in New York on Friday.

He will testify before a congressional commission in Washington on Tuesday (Sept 17).

Mr Kurt Tong, who retired two months ago from his post as US Consul General to Hong Kong and Macau, traced the unrest to the inherent contradictions in the "one country, two systems" framework that allows Hong Kong autonomy while it remains part of China.

"I have no particular problem with (the legislation), but I also don't think it's necessarily going to solve the problem with Hong Kong. It's an expression of concern which is useful, but also reinforces authorities that already exist under US law," he said at a forum organised by the Atlantic Council think-tank on Thursday.

For instance, the 1992 Hong Kong Policy Act already grants the President the discretion to treat Hong Kong as no longer separate from China on aspects of US law at his discretion, he added. The US government can also already sanction individuals under the Magnitsky Act.

Mr Tong, who is now with the Asia Group risk consultancy, said: "Passage of that aspect is largely symbolic. It shows a concern about Hong Kong."