PHOENIX, Arizona (WASHINGTON POST)- US Customs and Border Protection officials in Arizona announced their largest-ever seizure of fentanyl - 115 kilograms of powder and pills hidden in a truck hauling cucumbers.

The load was enough for more than 100 million lethal doses of the drug, a synthetic opioid that has fuelled an epidemic of US overdose deaths.

In addition to the fentanyl, which was concealed in a secret floor compartment of the trailer, officers also uncovered 179kg of methamphetamine, CBP officials said.

Michael Humphries, director of the Nogales port of entry, told reporters that the drugs were detected on Saturday after scanning equipment alerted officers to the presence of "anomalies" in the cargo that did not resemble any vegetable.

A CBP canine team searched the truck on Thuirsday (Jan 31), and officers opened the false floor compartment to find 400 packages of narcotics - an estimated US$3.5 million (S$4.7 million) worth of fentanyl and US$1.1 million worth of methamphetamine.

"This represents the largest fentanyl seizure in CBP history," said Humphries, standing beside armed CBP officers and a table stacked with dope.

The fentanyl, which is 50 times more potent than heroin, had been placed in hard plastic containers, apparently to avoid any potential exposure to CBP officers. 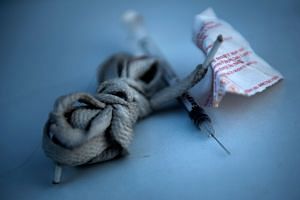 Fentanyl surpasses heroin as deadliest drug in US

The drug is considered so deadly that officers no longer cut open the suspected drug packets they seize at the border, aware that even a few salt-sized grains of the drug can be harmful.

"One kilogram of fentanyl produces one million fatal doses," said Juan Mariscal, the assistant special agent in charge of Immigration and Customs Enforcement's investigative unit in Nogales, who described the bust as part of a wider investigation.

The driver of the cucumber truck, a 26-year-old Mexican national who officials did not identify, will face federal drug trafficking charges, Mariscal said.

No other arrests have been made, he said.

More than 70,000 Americans died of drug overdoses in 2017, a record, according the latest available figures from the Centers for Disease Control and Prevention.

President Donald Trump has insisted his proposal for a border wall will reduce such deaths and stem drug trafficking, but CBP data indicate the vast majority of fentanyl, methamphetamine and other hard drugs are seized from vehicles attempting to drive through official ports of entry.