WASHINGTON (REUTERS, AFP, BLOOMBERG) - Boeing Co confirmed late on Monday (March 11) it will deploy a software upgrade to the 737 Max 8, a few hours after the Federal Aviation Administration said it would mandate “design changes” in the aircraft by April.

Boeing did not reference Sunday’s Ethiopian Airlines crash in connection to the software upgrade.

The statement did express the company’s condolences to the relatives of the 157 people who died, however.

The company said in the aftermath of October’s Lion Air Flight crash, it has for several months “been developing a flight control software enhancement for the 737 Max, designed to make an already safe aircraft even safer".

The software upgrade “will be deployed across the 737 Max fleet in the coming weeks", it said.

US federal aviation authorities said on Monday they would order Boeing to modify its 737 Max 8 aircraft, including anti-stalling software and manoeuvring system updates, after two of the planes crashed in five months.

The Federal Aviation Administration told international civil aviation authorities that it “anticipates mandating these design changes... no later than April", although it did not ground the fleet.

Boeing is also set to update its training requirements and flight crew manuals to reflect the changes.

“The FAA continuously assesses and oversees the safety performance of US commercial aircraft,” it said earlier.  “If we identify an issue that affects safety, the FAA will take immediate and appropriate action.”

The FAA has notified other global civil aviation authorities that it may soon share safety information concerning Boeing’s 737 Max 8, the statement said.

Nevertheless, US aviation regulators underlined their confidence in the safety of the 737 Max jetliner with a global notice of "continued airworthiness".

There isn't conclusive evidence so far to link the loss of an Ethiopian Airlines 737 Max 8 on Sunday (March 10) and a fatal Lion Air disaster involving the same jet model in October, the Federal Aviation Administration said Monday. Boeing is working on improvements to the plane's flight-control system and the FAA plans to publish a related directive to operators no later than April. 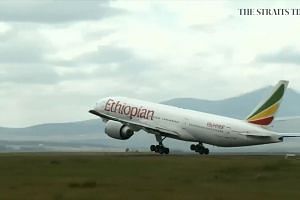 "External reports are drawing similarities between this accident and the Lion Air Flight 610 accident on October 29, 2018," the FAA said.

"However, this investigation has just begun and to date we have not been provided data to draw any conclusions or take any actions."

The statement signals that US regulators have no immediate intention of grounding the 737 Max 8, breaking with a decision by China and other to tell its airlines to suspend use of the plane after this weekend's crash that killed 157 people near Addis Ababa, Ethiopia.

Boeing's flight-control changes would address the plane's anti-stall software and faulty sensor linked to the earlier crash in the Java Sea off the coast of Indonesia.

The planemaker echoed the FAA's statement, saying it stood by the aircraft, a revamped version of its workhorse single-aisle jet. The 737 family is on pace to generate about $30 billion in annual revenue, and about a third of the company's operating profit, according to George Ferguson, an analyst with Bloomberg Intelligence.

"We are confident in the safety of the 737 Max and in the work of the men and women who design and build it," Boeing Chief Executive Officer Dennis Muilenburg said in a message to employees shortly after the FAA released its statement.

The Chicago-based company is devoting more resources to the 737 program, including customer support, Muilenburg said. He also reminded employees that all requests on the topic "must flow through the proper channels" as investigators probe the crash.

"There are still many facts to learn and work to be done," he said.

"Speculating about the cause of the accident or discussing it without all the necessary facts is not appropriate and could compromise the integrity of the investigation."

The FAA's "Continued Airworthiness Notification to the International Community" is how the FAA communicates about safety issues with other aviation regulators around the world.

With any accident involving a newly certified aircraft model, investigators and regulators pay special attention in the event that an unknown safety issue emerges.

The National Transportation Safety Board, which is the lead US agency under a United Nations treaty, sent a team of four investigators and they were joined by others from Boeing and the FAA.

"We're obviously very concerned about what's been happening and we're monitoring the situation very carefully because safety is our number one priority," Transportation Secretary Elaine Chao said on a conference call Monday with reporters about the department's budget request.

"We do have a few flight attendants who are indicating they are afraid to fly the 737 Max," said Lori Bassani, president of the Association of Professional Flight Attendants, which represents employees at American. No attendants have refused to fly on the plane so far.

More than 100 of the Boeing planes have been grounded outside the US, about one-third of the global Max fleet. The Chicago-based company is slated to deliver 558 of the Max 8 model over the next 12 months, according to Ron Epstein, an analyst with Bank of America Corp.

The US has only grounded an entire model of aircraft twice in the last 40 years. The most recent time was in January 2013 after two lithium-ion battery fires on Boeing's 787 Dreamliner model. The agency only acted after the second such incident occurred.