WASHINGTON - The top US diplomat for East Asia said on Monday (Dec 2) that Washington will not force countries in Asia to choose between the United States and China, but suggested that Beijing might not afford its neighbours that same choice.

Assistant Secretary of State for East Asian and Pacific Affairs David Stilwell outlined Washington's view of how the US and Chinese visions of the global order today are at odds with each other, boiling it down to one key difference: their attitudes towards pluralism.

The United States supports a pluralistic Asia, in which the region's diverse countries can continue to thrive as they wish, he said in a speech at the Brookings Institution.

"They are secure in their sovereign autonomy. They are free to be themselves, as Singapore's Lee Kuan Yew put it. No hegemonic power dominates or coerces them," he said.

"In a pluralistic Asia...international waters and airspace belong to all. No one country can convert them into a sole possession or a zone of exclusion," added Mr Stilwell, in a clear reference to China's increasingly assertive behaviour in the South China Sea.

In contrast, he said that China hopes to reshape the international system to become more compatible with its authoritarian practices.

"For Beijing, international relations is about hierarchy and big makes right. It is not respectful of pluralism or sovereign autonomy," said the retired Air Force general, who was confirmed in his position in June this year .

He made the case that China was against pluralism both within its borders - with the Chinese Communist Party's increasing enforcement of uniformity in places like Xinjiang and Hong Kong - and beyond, given its tendency to stifle unwelcome opinions even abroad.

The US has been grappling with redefining its relationship with a rising China, and Mr Stilwell's speech was a fresh attempt to present the great power competition in ideological terms while attempting to allay recurring concerns from other countries.

The shift in US policy towards China had triggered many questions, he said, summing them up: "We know Washington is against aggressive or threatening conduct by Beijing, but what is Washington for? In competing with the PRC, is Washington forcing countries to choose?" 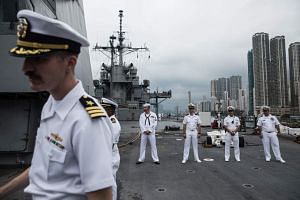 US has long track record of successful Hong Kong port visits, China ban has no impact on military operations: US officials

China may ban all US diplomatic passport-holders from Xinjiang: Global Times editor

Many firms have no contingency plans should US-China trade war worsen: Survey

The PRC refers to the People's Republic of China.

Said Mr Stilwell: "I want you to know, they won't be forced to make such a choice by the United States. When we say that America's vision is pluralistic and inclusive, we mean it, and our record shows it."

"We're not looking to dictate to others, and we want our allies and friends not to be subject to anyone else's dictates," he added, urging those countries to make choices that protect their sovereign national interests.

But the diplomat stressed that the US did not oppose China's growing power and prosperity.

He said: "The Trump Administration has been clear that, even as our relationship with the PRC is competitive, we welcome cooperation where our interests align. Competition need not lead to confrontation or conflict."

Later, at a panel discussion on China's role in East Asia and growing influence in South-east Asia, Brookings Institution senior fellow Jonathan Stromseth said that China views South-east Asia as a "testing ground for practicing the ways of becoming a great power".

But China's more assertive behaviour, from pumping billions into infrastructure mega-projects to land reclamation in the South China Sea, has led to a counter-reaction in the region to some extent, he said.

Malaysia and other countries are learning how to negotiate better with China and renegotiate contracts, and China is also learning from its mistakes, said Dr Stromseth, who is also Brookings' Lee Kuan Yew chair in South-east Asian studies at its Centre for East Asia Policy Studies.

"The conventional wisdom is that China will one day come to dominate this region, and my answer to that is well, it's not preordained," he said.

"The countries of Southeast Asia obviously have agency themselves. They're going to respond in different ways depending on geographic proximity, the opportunities they see economically, threat perceptions, history and so on."