WASHINGTON (REUTERS) - A deadline for exemptions to US steel and aluminum tariffs to expire loomed on Monday (April 30) but US allies and metals producers were still in the dark whether any countries would get extended relief, with Treasury Secretary Steven Mnuchin saying President Donald Trump had not yet made a decision.

Trump imposed a 25 per cent tariff on steel imports and a 10 per cent tariff on aluminum in March but granted temporary exemptions to Canada, Mexico, Brazil, the European Union, Australia and Argentina. He also granted a permanent exemption to South Korea.

The temporary exemptions will expire at 12.01am EDT (12.01pm Singapore time) on Tuesday (May 1) unless Trump extends them.

"The president has not made any decision yet," Mnuchin told Fox Business Network in an interview that aired on Monday. The treasury secretary was due to appear at a conference in Beverly Hills later on Monday.

Mnuchin's comments conflicted somewhat with comments by US Commerce Secretary Wilbur Ross, who told Bloomberg News in an interview published on Sunday (April 29) that the White House will continue to grant some countries relief from the metals tariffs.

Ross did not name the countries.

A steel industry source said it was possible that some countries could receive longer exemptions, particularly Canada and Mexico, given that the tariff negotiations have become intertwined with talks about updating the North American Free Trade Agreement.

Trump administration officials have said that in lieu of tariffs, steel and aluminum exporting countries would have to agree to quotas designed to achieve similar protections for US producers. 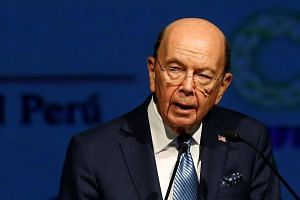 US to extend tariff relief to some allies, not all: Commerce Secretary

South Korea's permanent exemption is in exchange for it having agreed to cut its steel exports to the United States by about 30 per cent.

Trump has invoked a 1962 trade law to erect protections for US steel and aluminum producers on national security grounds, amid a worldwide glut of both metals that is largely blamed on excess production in China.

Canada's point person on Nafta talks, Foreign Minister Chrystia Freeland, was due to phone Canadian metals producers on Monday afternoon to update them on the situation, a Canadian source said. Canada is the largest source of steel imports into the United States, with an industry that is highly integrated with its southern neighbour.

EU Trade Commissioner Cecilia Malmstrom was due to speak with Ross on Monday in a last-ditch pitch for the 28 EU member countries. She has insisted on a permanent exemption without conditions.

"The only thing that I can tell you today is that we are patient but we are also prepared," European Commission spokesman Margaritis Schinas told a news conference earlier on Monday.

If the EU is subject to tariffs on the 6.4 billion euros (S$10.2 billion) of the metals it exports annually to the United States, it has said it will set its own duties on 2.8 billion euros of US exports of products ranging from make-up to motorcycles.