WASHINGTON (REUTERS) - Two officials who had been asked to testify in the impeachment investigation of US President Donald Trump have agreed to provide depositions, an official with a Democratic-led House of Representatives committee said on Tuesday (Oct 1).

Former US Ambassador to Ukraine Marie Yovanovitch will give a deposition on Oct 11, according to the committee official who spoke on condition of anonymity. Mr Trump's former special representative for Ukraine, Mr Kurt Volker, will appear before the panel on Thursday (Oct 3), the official said.

Mr Biden is the Democratic front-runner in the party's contest to run against Republican Trump in the 2020 election.

The unidentified whistleblower is said to be an intelligence agent who accused Mr Trump of soliciting foreign interference for his personal political benefit.

Earlier on Tuesday, US Secretary of State Mike Pompeo pushed back on House Democrats' efforts to get the depositions from state department officials, accusing the lawmakers of bullying and intimidation.

The officials "may not attend any interview or deposition "without executive branch counsel present to control disclosure of confidential information, Mr Pompeo wrote in a letter to House Foreign Affairs Committee Chairman Eliot Engel.

Mr Engel and two other Democratic committee chairmen issued a statement accusing Mr Pompeo of "stonewalling" the impeachment inquiry, and called him a "fact witness" in the investigation, based on media reports that he had listened in on Mr Trump's call with Zelensky.

"He should immediately cease intimidating department witnesses in order to protect himself and the president," Mr Engel and Representatives Adam Schiff and Elijah Cummings said.

There was no immediate word on whether three other officials had agreed to requests to appear before the committees. They are Deputy Assistant Secretary of State George Kent, State Department Counsellor T. Ulrich Brechbuhl and US Ambassador to the European Union Gordon Sondland.

The State Department did not immediately respond to a request for comment.

Mr Volker resigned last week after the whistleblower named him as one of two US diplomats who followed up with Ukrainian officials a day after the Trump-Zelensky call.

The call occurred after Mr Trump froze nearly US$400 million (S$554 million) in aid intended to help Ukraine deal with an insurgency by Russian-backed separatists.

Mr Zelensky agreed during the call to investigate Mr Biden and his son Hunter Biden and expressed interest in buying more US arms in the form of Javelin anti-tank missiles. Mr Hunter Biden had served as a director of a Ukrainian gas company.

The funds were later provided and a US congressional aide said on Tuesday that Ukraine had agreed to buy 150 Javelin missiles, made by Raytheon Co and Lockheed Martin Corp , in a deal worth US$39 million. Leaders of congressional committees signed off on the sale in the past week under an informal review process for major international military sales. 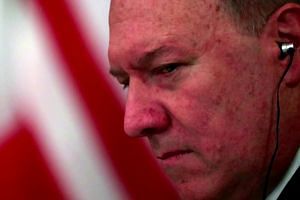 Trump and Johnson have weaponised the will of the people

The impeachment inquiry could lead to approval of articles of impeachment - or formal charges - against Mr Trump in the House.

That would lead to a trial in the Senate on whether to remove him from office. But the president's fellow Republicans control that chamber and have shown little appetite for removing him.

Mr Pompeo, who is in Italy for a three-day trip, objected to Mr Engel's request for the officials to be made available for depositions.

In a letter posted on Twitter, Mr Pompeo told Mr Engel: "I am concerned with aspects of your request that can be understood only as an attempt to intimidate, bully and treat improperly the distinguished professionals of the Department of State, including several career Foreign Service Officers, whom the committee is now targeting."

Mr Pompeo expressed "significant legal and procedural concerns"and said he viewed a committee letter to the officials as a"request for a voluntary appearance".

Mr Pompeo said the announced dates for the depositions did not provide enough time for preparation. He also said his department would respond to a Foreign Affairs Committee subpoena by Friday (Oct 4).

He said records that have been requested are subject to restrictions relating to classified information and other executive branch privileges. Mr Pompeo added that there was no legal basis for the committee's assertion that a failure to appear would constitute evidence of obstruction.

Mr Pompeo said he would use "all means at my disposal to prevent and expose any attempts to intimidate the dedicated professionals" at the State Department.

Democrats have accused Mr Trump of a policy of stonewalling legitimate congressional inquiries.

"Any effort to intimidate witnesses or prevent them from talking with Congress - including State Department employees - is illegal and will constitute evidence of obstruction of the impeachment inquiry," the three Democratic chairmen said. 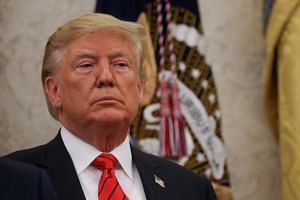 Who's who in Trump impeachment probe

Mr Trump continued on Tuesday to assail the impeachment inquiry and defend his call with Mr Zelensky. The president asked on Twitter: "Why aren't we entitled to interview & learn everything about the Whistleblower, and also the person who gave all of the false information to him."

Mr Trump also wrote that Mr Schiff should be "brought up on charges". A senior Republican senator, Mr Chuck Grassley, came to the defence of the whistleblower.

"This person appears to have followed the whistleblower protection laws and ought to be heard out and protected," Mr Grassley said in a statement.

White-collar defence lawyer Jon Sale, who served as an assistant special prosecutor in the 1970s Watergate political scandal, said on Tuesday he would be representing Mr Giuliani with the congressional inquiries.