NEW YORK (BLOOMBERG) - Democratic presidential candidate Joe Biden called on Tuesday (Jan 7) for President Donald Trump to return to diplomacy to ease rising tensions with Iran and urged the president to explain why he's chosen to escalate a situation that had appeared relatively calm for months.

"The only way out of this crisis is through diplomacy - clear eyed, hard-nosed diplomacy grounded in a strategy that's not about one-off decisions and one-upsmanship," Mr Biden said.

With less than four weeks until the Iowa caucus, Mr Biden's quickly organised speech in New York was a chance for him to show off his deep knowledge of international issues and to demonstrate to voters that he has leadership qualities he believes the president lacks.

Polls suggest Democratic voters think he possesses those qualities more than his rivals for the nomination.

Subdued and reading from a teleprompter, the former vice-president spoke in detail about Middle East policy and the traditional cooperation between the White House and Congress.

"No one wants war. But it's going to take hard work to make sure we don't end up there by accident."

The former vice-president said he knew that Mr Trump wouldn't listen to his advice but said he hoped the president would listen to top national security officials and find a way to back away from his "tweets, threats and tantrums" of the past week.

He urged Mr Trump to reach out to European allies and to signal privately to Iran that the US was still open to a diplomatic resolution.

Mr Biden conceded on Tuesday that the president's penchant for provocation makes him ill-suited to de-escalate the situation or to explain it to the American people, leaving what the candidate sees as a vacuum to show off his own leadership skills.

"Because he refuses to level with the American people about the dangers which he has placed American troops and our diplomatic corps of personnel and civilians as well as our partners and he, or demonstrated even a modicum of presidential gravitas, I will attempt to do that," Mr Biden said as he laid out the recent history of US-Iran tensions, beginning with Mr Trump's decision to withdraw in 2018 from the Iran nuclear deal.

When Mr Trump withdrew from the Iran deal, Mr Biden said, he "turned his back on our closest European allies, and decided it was more important to him to destroy any progress made by the Obama-Biden administration than build on it to create a better, safer world". 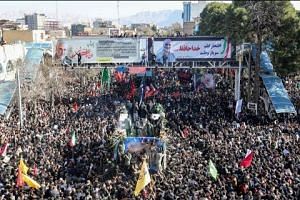 At least 56 killed in stampede at funeral of Iran general Soleimani, as Teheran vows revenge on US

Ideally, Mr Biden said, Mr Trump would ease tension by agreeing to "rejoin the Iran deal and build on it".

Mr Biden has spoken about Iran at nearly every public appearance he has made since the Trump administration confirmed last Friday that it had killed General Qassem Soleimani.

On Tuesday, he repeated those themes, including that Mr Trump must get congressional approval to engage in further military actions against Iran and, to do that, must tell the American people why he is moving ahead so aggressively.

"The American people do not want, and our Constitution will not abide, a president who rules by fiat and demands obedience," he said of Mr Trump's refusal to explain his actions outside of his Twitter account.

"We have not heard a sober-minded explanation to reassure the American people that this decision and its consequences were thought through."

Mr Tony Blinken, the former deputy secretary of state and long-time Biden foreign policy adviser, and Ms Carlyn Reichel, Mr Biden's foreign policy speechwriter since he was in the White House, advised him on the speech, along with a deep bench of foreign policy experts, his campaign said.

US-Iran tension: Iran missile attack on US base | THE BIG STORY | The Straits Times

A CNN poll in late October, before the escalation of tensions, found that Mr Biden had a huge advantage on foreign policy over the rest of the Democratic field. Some 56 per cent of the Democrats polled said they believed he would best handle the issue, compared with 13 per cent for Mr Bernie Sanders and 11 per cent for Ms Elizabeth Warren. Next was Mr Pete Buttigieg, the former mayor of South Bend, Indiana, and a veteran of the war in Afghanistan, at 3 per cent.

Mr Sanders, who voted against that Bill, said on Monday that he'd "do everything I can to stop another disaster", pointing to legislation he introduced in the Senate that would bar the Trump administration from spending funds to take military action against Iran.