WASHINGTON (REUTERS, AFP) - Top White House economic adviser Gary Cohn, a Wall Street banker who became a key architect of the 2017 tax overhaul and a bulwark against protectionist forces within the Trump administration, is resigning, the White House said on Tuesday (March 6).

The departure of Cohn, the National Economic Council director, expected to be finalised in a few weeks, will blow a hole in Trump’s advisory team at a time when the economy is growing but stock markets are experiencing surges of volatility.

"It has been an honour to serve my country and enact pro-growth economic policies to benefit the American people, in particular the passage of historic tax reform. I am grateful to the President for giving me this opportunity and wish him and the administration great success in the future," Mr Cohn said in a statement issued by the White House.

Mr Cohn's resignation came after US President Donald Trump said he would impose hefty tariffs on steel and aluminium imports in a move that would hit close allies Canada and Mexico.

Mr Trump's pledge to impose tariffs had prompted speculation that Mr Cohn might leave the White House because of his opposition to the policy.

“Gary has been my chief economic advisor and did a superb job in driving our agenda,” Trump said in a statement.

“He is a rare talent, and I thank him for his dedicated service.”

In a tweet late on Tuesday (March 6), the US  president said he would make a decision soon on appointing a new chief economic adviser. 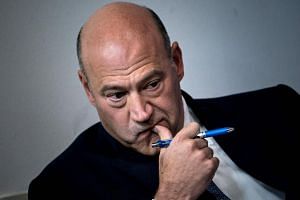 "It looks like Gary Cohn has been completely unsuccessful in trying to stop the steel and aluminum tariffs,” said Monica de Bolle, a senior fellow at the Peterson Institute for International Economics, a Washington-based think tank.

Mr Cohn’s departure indicated Trump would proceed with the tariffs, she said.

“The chances of us having a trade war have now increased dramatically. ... The economic nationalists now certainly have the upper hand and their camp is bigger. I think they are going to be very influential in the administration,” she added.

US stock futures fell more than 1 per cent late Tuesday after news of Cohn's resignation.

Investors said the news, which creates more uncertainty over the administration’s economic agenda, will likely weigh on the market in Wednesday trading as well.

“It’s a very significant deal for the markets. The markets don’t like tariffs ... Gary Cohn was one of Wall Street’s guys and an endorser of conventional economic policy,” said Michael Purves, chief global strategist at Weeden & Co in New York.

“That is driving policy uncertainty and a path to potentially more of a populist nationalist economic agenda. The market is selling off for a good reason.”

The White House downplayed the idea Cohn resigned over more aggressive trade policies, saying the tariffs dispute contributed to Cohn’s decision to leave but was not the sole reason.

One official cited several issues and noted: “His biggest mission was on the tax cut Bill, which he got passed.”

After the tax package was approved, Cohn tackled an infrastructure initiative, but it has been slow to gain traction and will likely be further handicapped by his departure, the latest in a series of recent high-profile departures from the White House.

Mr Cohn's relationship with Trump began to sour in mid-2017 after he disagreed with the president’s tepid response to clashes between neo-Nazis and anti-racism protesters in Charlottesville, Virginia, sources close to Cohn said.

Only moments before Cohn's resignation announcement Trump showed no signs of backing down on his tariff even in the face of opposition from his own party.

Speaking to reporters, Trump said he was elected to protect American workers and industries that had been harmed by years of unfair trade policies.

“Our country has been taken advantage of by everybody. By everybody. And we cannot let that happen any longer,” Trump said during a joint press conference with Swedish Prime Minister Stefan Lofven.

But Trump’s aggressive plan to punish abusers by imposing 25 per cent tariffs on steel and 10 per cent on aluminum, against friend and foe alike, angered US trading partners. It also startled US automakers and firms that rely on those metals and the free flow of trade.

Even administration officials were caught off guard by the announcement late last week, since the legal review had not been completed. Reports of Cohn’s likely resignation began to circulate almost immediately.

Mr Cohn, a former president and chief operating officer of investment bank Goldman Sachs, was one of a number of Wall Street veterans tapped by Mr Trump for senior jobs after the 2016 presidential election.