WASHINGTON (AFP) - A new United States "Space Force" will soon take shape but will, at least initially, be a step below the proposed sixth branch of the military envisioned by President Donald Trump, his vice-president said on Tuesday (Oct 23).

The White House does not foresee the creation of an independent space force before 2020, said US Vice-President Mike Pence, who heads the National Space Council, a government body that was revived last year after a decades-long hiatus.

Mr Pence said the president will soon ask Congress to gather military and civilians working on space security into a unified command, similar to the military's special forces.

"The National Space Council is making recommendations to the president to essentially begin with establishing a unified Space Command, much in the way that we established a Special Forces command," Mr Pence said at a space conference organised by the Washington Post.

"Let's begin by bringing everyone under a unified command," he said, adding that he would also like to see a Space Development Agency tasked with new technologies.

According to Mr Pence, about 60,000 people are currently working on space security in the US, across various branches of the military and intelligence services.

"It will not, in the first instance, look like other branches of the service that were stood up. It will be a consolidation, we believe, and from there, future Congresses and future administrations can grow and expand and nurture... the Space Force as they see fit," Mr Pence added.

Congress must approve the proposed plans. 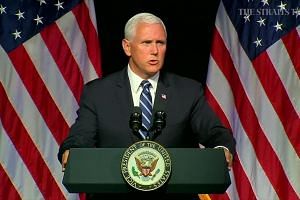 ‘Time has come’ to create a US Space Force, a sixth branch of the military, says Mike Pence

Trump mulls US space force to take on rivals in orbit

Previously, the notion of immediately creating a Space Force on a par with the US Army or Air Force sparked controversy among lawmakers, some of whom want space to remain under the guise of the Air Force.

Mr Pence also said the administration would work with Congress, starting next year, to vote on a law creating an independent Space Force by 2020.

The head of the US Air Force said in September that creating a Space Force would cost about US$13 billion (S$18 billion) for a force of 13,000 people in the first five years.

The US military is made up of five branches: the Army, Air Force (which currently oversees space operations), the Navy, Marines and Coast Guard.

Speaking at a meeting of the National Space Council on Tuesday, Mr Pence said, "Space is a war-fighting domain, just like the land, air and sea, and America will be as dominant there as we are here on Earth."