WASHINGTON (REUTERS) - Republicans on Thursday (Oct 24) pressed their campaign to discredit the Democratic-led impeachment inquiry against US President Donald Trump by introducing a US Senate resolution that called the process unfair but said nothing about Trump’s conduct in his dealings with Ukraine.

Forty-four of the 53 Republicans in the 100-seat Senate have signed on to the resolution, which urges the Democratic-controlled House of Representatives to hold a formal vote to initiate the impeachment inquiry and give Trump the ability to “confront his accusers” and call his own witnesses, said its lead sponsor, Senator Lindsey Graham.

The resolution does not say Trump should not be investigated and does not address the substance of the inquiry. The US Constitution gives the House wide latitude in how to handle impeachment.

The inquiry focuses on Trump’s request in a July 25 telephone call to Ukrainian President Volodymyr Zelenskiy to investigate a domestic political rival, Joe Biden, the former vice president who is a leading contender for the Democratic presidential nomination to face Trump in the 2020 election.

US election law prohibits candidates from accepting foreign help in an election.

Trump’s fellow Republicans in Congress this week ratcheted up efforts to fight the investigation after Trump on Monday urged them to get tougher on the Democrats leading it.

If the House passes articles of impeachment – formal charges - the Republican-controlled Senate would then hold a trial on whether to remove Trump from office. A two-thirds majority of the Senate would be required to remove the president. Only three US presidents before Trump have faced impeachment inquiries and none were removed from office via the process.

The resolution accused House Democrats of “abandoning more than a century’s worth of precedent and tradition in impeachment proceedings and denying President Trump basic fairness and due process accorded every American.”

Graham decries impeachment inquiry as 'out of bounds'

Even if passed in the Senate, the resolution would not affect the House inquiry. However, it would place Republican senators on the record on impeachment at a time when some cracks in Trump’s support within his own party have appeared, including pointed criticism from Senator Mitt Romney.

Senate Majority Leader Mitch McConnell announced his support for the resolution, saying the House “must adhere to the highest standards of fairness and due process,” but did not say when he would bring it up for a vote.

Graham, who on Tuesday agreed with the president’s description of the impeachment probe as a “lynching,” said the House process was “illegitimate.”

Graham also lamented that the Democrats were not using the same procedures that House Republicans used two decades ago when they impeached Democratic President Bill Clinton concerning a sexual relationship with a White House intern. The Senate declined to remove Clinton from office following a trial.

As the inquiry intensifies, the White House is considering bringing on board a communications specialist to handle messaging, sources familiar with the process said.

Graham, who as a House member pushed for Clinton’s impeachment, urged Trump to follow the successful playbook used by Clinton, in which the president pushed back against Republicans but also focused on his daily duties.

“President Clinton defended himself. But he never stopped being president,” Graham said. 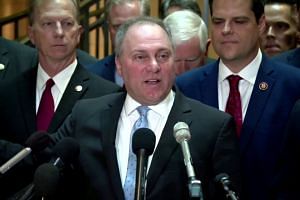 Republicans have complained about Democrats hearing from witnesses in closed sessions and not allowing lawmakers who are not members of the three committees leading the inquiry from being present for depositions. Republican members of the committees have taken part in the proceedings throughout.

More than two dozen House Republicans barged into the high-security hearing room on Wednesday and delayed for several hours the testimony of a Pentagon official.

Authorities at the US Capitol conducted a “sweep” inside the room where the standoff had occurred to check for security breaches such as listening devices after the Republican protest, two sources said on Thursday. Some of the Republican lawmakers had brought cellphones into the room, where electronic devices are prohibited for security purposes.

“Thank you to House Republicans for being tough, smart, and understanding in detail the greatest Witch Hunt in American History. It has been going on since long before I even got Elected (the Insurance Policy!). A total Scam!” Trump said on Thursday in a Twitter post.

Chuck Schumer, the top Senate Democrat, accused Trump and his Republican congressional allies of hypocrisy for demanding that the proceedings be held in public even as the administration withholds subpoenaed documents and tries to block testimony to House investigators.

“The hypocrisy, the self-serving nature of the president’s statements and his Republican allies here in the House and Senate is glaring,” Schumer said.

Democrats have said there will be public hearings in the coming weeks. They hope to complete the inquiry by the end of the year and are coalescing around two articles of impeachment: abuse of power and obstruction, lawmakers and aides have told Reuters.

Trump had withheld US$391 million (S$530 million) in security aid to Ukraine passed by Congress to help counter Russia-backed separatists in eastern Ukraine. During the call with Trump, the Ukrainian president agreed to investigations of Biden and his son Hunter Biden’s tenure on the board of Burisma, a Ukrainian energy company. The aid was later provided.

William Taylor, the top US diplomat in Ukraine, testified on Tuesday that Trump had made the aid contingent on Zelenskiy announcing he would investigate the Bidens and a debunked conspiracy theory that Ukraine, and not Russia, meddled in the 2016 US presidential election.