NEW YORK (AFP) - For US farmers affected by the trade war unleashed by President Donald Trump, the US$12 billion (S$16.3 billion) in emergency aid from his administration's is a temporary remedy, and it comes with several potential negative side effects.

The Agriculture Department announced the aid on Tuesday to help farm producers hurt by retaliation by major trading partners against US tariffs on steel, aluminium and tens of billions of dollars in Chinese products.

USDA said it would use a Depression-era farm support fund to make direct payments to producers of soybeans, sorghum, corn, wheat, cotton, dairy and hogs.

It also intends to purchase excess production of commodities such as fruits, nuts, rice, legumes, beef, pork and milk for distribution to food banks and other nutrition programs.

The size of the aid program is "unprecedented," said Joseph Glauber, a former USDA economist now at the International Food Policy Research Institute.

But its effectiveness will be limited, he said, and it creates a "moral hazard." And ironically, depending on the criteria used, some of the benefits could go to Chinese-owned companies.

"The pork industry is dominated by very large corporations," said Chris Hurt, agricultural economist at Purdue University, in Indiana. "The largest hog producer in the US, Smithfield, is owned by a Chinese company."

Agriculture Secretary Sonny Perdue said the new aid will not need congressional approval, but the programme drew sharp criticism from many legislators, including Republicans.

National Farmers Union President Roger Johnson said crop prices are falling and farmers' "livelihoods are on the line with every tweet, threat or tariff action that comes from the White House".

But after the US economy grew 4.1 per cent in the second quarter, and the European Union agreed to a ceasefire in the trade confrontation with the US, Trump declared it a victory for his tough policies.

In announcing the aid for farmers, Perdue acknowledged that US farms were being hurt by what he called "illegal retaliation" to the tune of US$11 billion so far.

And EU officials downplayed Trump's claim they had made a commitment to buy more US soybeans.

Meanwhile, analysts say that other industries caught up in the trade war may now expect relief from the government. 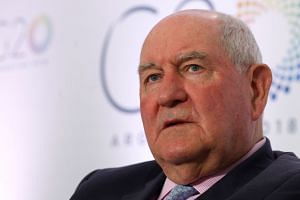 US farmers could receive cash from Trump aid plan by September: Perdue 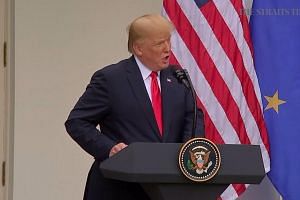 Trump declares victory for farmers in trade spat with EU

"Knowing this administration, they'll design a bailout to help only massive agro-businesses who will use the money for stock buybacks," said senior Democratic Senator Chuck Schumer said.

"And where does the bailout stop? What about people who use steel and aluminium? What about other goods that have been targeted by our foreign competitors? Are they going to get bailouts too?

US farmers already receive about US$20 billion a year from the government through various programmes.

But the new aid "creates a bit of a moral hazard," Glauber told AFP.

"If you compensate producers right now, there is no real urgency to resolve trade disputes for the farmers."

And the longer-term loss of markets for American crops is far worse that the short-term financial hit, he said.

Farmers want trade not "a Band-Aid on a broken leg."

China currently buys a third of US soybeans, and while importers stockpiled them in the two months before punitive tariffs hit in July, they likely will turn to Brazil to buy what they need, and it may be hard to win back market share.

And even if the EU starts buying more from US farmers, China is the destination for two-thirds of the world's soy shipments.

Another question remains how the program will impact falling crop prices and even the cost of farmland, once the payments begin, which the USDA said should be in early September.

"The land market could get distorted. Crop farmers are often willing to invest the extra money in land, that would hike the prices," Purdue University's Hurt said.