WASHINGTON (BLOOMBERG) - Turkey has dug in on buying a Russian-missile defence system in defiance of threatened US sanctions because trust in Washington has broken down, three Turkish officials said.

Ankara has concluded that Washington is acting more like an adversary than an ally, and President Recep Tayyip Erdogan has resolved to stand firm, the officials said. From Mr Erdogan’s perspective, there are several grievances.

The Pentagon armed Syrian Kurdish forces that Turkey regards as a threat to its territorial integrity. Washington has refused to extradite a Turkish preacher whom Ankara blames for a failed coup attempt.

Turkey’s economy has been pummelled by US sanctions on Iran that are driving up energy prices. The United States is backing Turkey’s rivals in a natural gas dispute with Cyprus and in other regional conflicts.

Turkey, the officials said, is convinced the US cannot replace it strategically with another ally if it goes ahead with the purchase of the S-400 anti-missile system. The officials are directly familiar with the thinking and planning surrounding security issues and spoke on condition of anonymity to discuss sensitive matters.

The US perspective, however, is very different.

While President Donald Trump has praised Mr Erdogan as a strong leader and an ally fighting terrorism, the US says it will have to cut off Turkey from buying – and helping to build – F-35 fighter jets if it purchases the Russian anti-missile system designed to shoot down such planes.

The administration is weighing three sanctions package, including one that would all but cripple the already troubled Turkish economy, with penalties possible as early as July, according to people familiar with the matter.

The Trump administration, like the Obama team before it, says US law would not let it extradite Fethullah Gulen, the exiled Erdogan ally-turned-enemy, unless Turkey can provide stronger evidence that he was behind the coup attempted by his followers. And the US says it owes the Syrian Kurdish fighters protection from threatened Turkish attacks after all they did to fight the Islamic State in Iraq and Syria terror group.

If the US and Turkey cannot come to terms, ties may be irrevocably harmed as anti-American and anti-Turkish sentiments flare on either side of the divide. The US would risk losing a critical partner in the volatile Middle East, and Turkey would risk losing its strongest Western ally and its main weapons supplier.

Yet, while Russian President Vladimir Putin may see the missile sale as a wedge between Turkey and the US, Ankara is not thinking of jettisoning Washington for Moscow, the Turkish officials said.

Earlier this month, acting Defence Secretary Patrick Shanahan said in a letter to a Turkish counterpart that “in addition to threatening the security of platforms like the F-35, Turkey’s procurement of the S-400 will hinder your nation’s ability to enhance or maintain cooperation with the United States and within Nato” and “lead to Turkish strategic and economic over-dependence on Russia”.

Mr Erdogan plans to discuss the S-400 purchase with Mr Trump at the Group of 20 summit this month. He is counting on his personal rapport with the US leader to fend off stinging sanctions. Ankara is still bracing for the worst-case scenario due to strong opposition in Congress, while remaining confident it holds strong cards, the officials said.

Having served as a bulwark against Russia during the Cold War, Turkey still hosts American nuclear warheads at its Incirlik air base and military installations used by the US to spy on Russia, they noted. It is also the only barrier keeping more than four million refugees, most of them Syrians, from flooding into Europe, they said.

“We will throw away the straitjacket they are trying to put on Turkey,” Mr Erdogan said on Sunday (June 16).

As Mr Erdogan forges an increasingly independent diplomatic path in the region, Turkey has set out new military ambitions based in part on technology from the Russian missile deal. It hopes to produce even more sophisticated ballistic missiles and its own fighters eventually, the officials said. 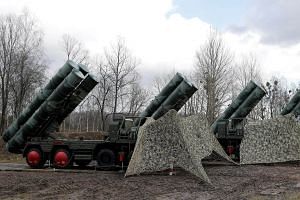 “We will either be a country dependent on others, or we will endure difficulties together with our nation to become a fully independent and free country and continue on our path,” Foreign Minister Mevlut Cavusoglu said last Friday.

Turkey’s sense that it must take its defence into its own hands was deepened in 2015 when the US withdrew air defences from Turkey following Ankara’s crackdown after a surge of Kurdish militant violence.

Turkey bitterly remembers a crippling US arms embargo imposed after Turkey seized northern Cyprus following an attempt to unite the island with Greece in 1974.

The prospect of US sanctions over the S-400 helped to send the lira sliding more than 10 per cent this year.

Actual penalties – including threatened exclusion from F-35 production by July 31 – could aggravate the country’s economic woes and complicate the development of its defence industry. Istanbul’s financial markets were already sent into a once-in-a-generation nosedive last summer after Mr Trump sanctioned Turkey to secure an American pastor’s freedom.

Turkey sent its response to the July 31 deadline on Tuesday, defending its position and expressing its uneasiness over the tone, which it said “doesn’t comply with the spirit of alliance".

While the US in December proposed selling its Patriot missile defence system to Turkey in a bid to get it to scrap the S-400 purchase, it is not even clear Congress would approve it because of anti-Turkey sentiment among American lawmakers, the officials said.

Turkey’s fixation on missile defence dates back more than half a century, when the US withdrew its Jupiter missiles from the country in exchange for the removal of Soviet launchers from Cuba. That helped to end the 1962 Cuban missile crisis, but Turkey has remained haunted by the weakness of its air defence ever since.

US pressure was enough to force Turkey to scrap its earlier deal to buy a missile defence system from China in 2013, but circumstances are different now. Ankara is furious at Washington for arming the Syrian Kurdish militia – saying it also has ties to a separatist movement that Turkey has been battling for decades.

While its grudges against the US were multiplying, Turkey began cooperating militarily with Russia in Syria to protect its security interests.

Incirlik, used for US air operations against ISIS, was once the main operating location for the American U-2 plane that spied on Russia.

Today, in a sign of Turkey’s shifting priorities, a giant white-and-red signboard has been erected at the entrance to the base. It reads: “Strong army, strong Turkey.”