WASHINGTON (BLOOMBERG) - US President Donald Trump said it would be wise for China to "act now" to finish a trade deal with the United States, predicting that "far worse" terms would be on offer for them after what he predicted would be his certain re-election in 2020.

"I think that China felt they were beaten so badly in the recent negotiation that they may as well wait around for the next election," Trump said on Saturday (May 11) in a pair of early-evening tweets.

"The only problem is that they know I am going to win."

Trump's comments came a day after talks between the two economic superpowers ended without a resolution, the US increased its tariffs on billions of dollars of imports, and China made clear what it wants to see from the US in talks to end their trade war.

In a wide-ranging interview with Chinese media after talks in Washington ended Friday, Vice-Premier Liu He said that in order to reach an agreement the US must remove all extra tariffs, set targets for Chinese purchases of goods in line with real demand, and ensure that the text of the deal is "balanced" to ensure the "dignity" of both nations.

Liu's conditions underscore the work still to be done if an accord is to be reached between the world's two largest economies.

Trump's own negotiators told China it has a month to seal a deal or face tariffs on all its exports to the US.

That threat was made during talks Friday in Washington, hours after Trump upped the ante by imposing a second round of punitive duties on US$200 billion (S$272.58 billion) in Chinese goods.

China vowed retaliation, but hadn't announced any details as of early Sunday morning in Beijing. 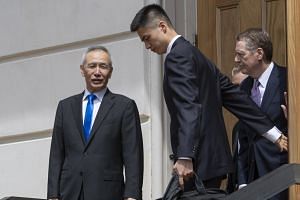 US Trade Representative Robert Lighthizer said the administration would on Monday release details of its plans for tariffs on an additional US$300 billion in imports from China, setting the process in motion for Trump to deliver on the threat to hammer all Chinese trade.

US officials insist they have been working on a deal that would bring an end to what they portray as China's rampant theft of American intellectual property and rein in the industrial subsidies that have fuelled the rapid ascent of Chinese corporate giants.

Trump's move to raise tariffs on Friday came after China backed away from prior commitments to enshrine changes promised at the negotiating table in Chinese law, according to US officials.

During his meetings in Washington this week Liu said China was ready to commit to pushing reforms via State Council directives but again balked at changing any laws, according to one person familiar with the discussions.

In his interview Liu said both sides agreed to keep talking despite what he called "some temporary resistance and distractions,'' and to hold future meetings in Beijing.

He dismissed the idea that talks had broken down. "It's normal to have hiccups during the negotiations. It's inevitable." Liu also struck a note of defiance.

"But China is not afraid, nor are the Chinese people," adding that "China needs a cooperative agreement with equality and dignity.

In a series of tweets that cheered markets, Trump declared Friday that the talks with China had been candid and constructive.

"The relationship between President Xi and myself remains a very strong one, and conversations into the future will continue," he said.

Further talks are possible, but there's no immediate plan for the next round, according to a person familiar with the negotiations.

Liu's comments, however, revealed yet another new fault line: a US push for bigger Chinese purchases to level the trade imbalance than had originally been agreed.

According to Liu, Trump and Chinese President Xi Jinping agreed "on a number" when they met in Argentina last December to hammer out the truce that set off months of negotiations.

That "is a very serious issue and can't be changed easily."

The amount of purchases by China should be "in line with reality," according to a commentary by state news agency Xinhua on Saturday.

China also sees the removal of all the extra tariffs that have been imposed since last year as a precondition to a deal, whereas US negotiators see retention of some duties as a key mechanism to enforce a deal.

The lack of progress left major question-marks hanging over the search for a deal on trade - just one source of tensions in a growing geopolitical rivalry that's already shifting supply chains and testing established economic and security alliances.

Trump, who is seeking re-election on the back of a booming US economy, on Friday sought to justify his decision to hike tariffs as well as to convince businesses and financial markets that he wasn't walking away from a deal.

"There is absolutely no need to rush," the US president said. In another tweet, Trump proposed a vast new plan to use income from tariffs to buy up the crops of American farmers who've watched their exports to China collapse, and send them to poor countries as aid.

The presidential good humour hid what people familiar with the discussions say has been an increasingly gloomy mood around the negotiations in recent days.

Before a rebound late Friday, US equity markets had posted their worst week of the year, as the trade truce that had been in place for months was shattered by the new US tariffs.

This week's tariff move is likely to have significant short-term consequences for retailers and other US businesses reliant on imports from China.

But extending it to all trade would increase the economic and political stakes even further for Trump and American businesses.

Such a step would see price increases on smartphones, laptops and other consumer goods - the kind that Trump's advisers have been eager to avoid, out of concern for the domestic fallout.

It would likely provoke further retaliation, and some economists are predicting it could even tip the US economy into recession just as Trump faces re-election in 2020.

This week's talks have also amplified the differences that remain between the two governments as they navigate their own domestic politics as well as a growing international rivalry.

Liu's interview underlined the need for any agreement not to be seen as undermining Chinese sovereignty - as the US demand to change domestic laws surely would be.

The text "must be balanced" for the dignity of a country, Liu said, repeating China and the US are "trying to meet halfway" despite different views on some crucial issues.

Securing a trade deal is likely to get harder from here unless outside factors, such as an economic downturn, force a compromise, according to Ely Ratner, a China expert who served in the administration of President Barack Obama and is now director of studies at the Center for a New American Security think-tank.

"The question is can the Chinese come back and offer enough such that Trump can sell it?'' he said.

"It is going to be hard for them to do that in the face of Trump escalating. I think it gets harder as this thing goes on, and it gets harder politically for Trump.''