WASHINGTON (BLOOMBERG) - President Donald Trump instructed aides on Thursday (Sept 14) to proceed with tariffs on about US$200 billion (S$270 billion) more in Chinese products despite his Treasury secretary’s attempt to restart talks with Beijing to resolve the trade war, according to four people familiar with the matter.

But an announcement of the new round of tariffs has been delayed as the administration considers revisions based on concerns raised in public comments, the people said.

Trump may be running low on products he can target without significant backlash from major US companies and consumers, two of the people said.

The threat of fresh tariffs roiled financial markets. US stocks erased gains, dropping to session lows, while the dollar strengthened versus the Chinese offshore yuan by the most in two weeks. Technology shares led declines, with Apple Inc. falling as much as 1.7 per cent. The iPhone maker last week warned that new tariffs could increase the cost of its products.

Trump met with his top trade advisers on Thursday to discuss the China tariffs, including Treasury Secretary Steven Mnuchin, Commerce Secretary Wilbur Ross and US Trade Representative Robert Lighthizer, the people said. Mnuchin has led a recent overture to the Chinese to re-start trade talks.

Trump was asked during the meeting whether he was concerned about the impact of the new tariffs on negotiations with China. He responded that he wasn’t, two of the people said. 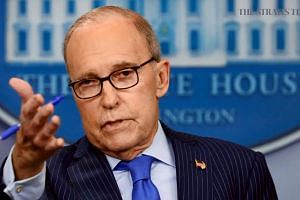 Trump says US ‘under no pressure’ to make China trade deal

'Made in China' no more: Chinese companies flee overseas to avoid US tariffs

The Chinese have retaliated with tariffs on an equivalent amount of US exports, and have promised to match future rounds of US duties.

Before his meeting on Thursday, which didn’t appear on his public calendar, Trump boasted on Twitter that he has the upper hand in the trade feud with Beijing and feels “no pressure” to resolve the dispute.

His comment tempered cautious optimism among investors over the US government’s proposal for another round of talks with Beijing. Disclosure on Wednesday that the US sought to renew the talks rallied US stocks and emerging-market assets.

Third Round Trump threatened a third tranche of tariffs on another US$267 billion of Chinese imports last week, which would mean levying duties on nearly everything China exports to the US Trump said at the time those tariffs were “ready to go on short notice,” but the administration hasn’t yet published a list for public comment.

It has become tricky to find additional products for duties that won’t more obviously impact American consumers, according to two people. There was no decision made during Thursday’s meeting regarding when to issue the US$267 billion round.

Apple said last week the US$200 billion round of tariffs could hit some of its most popular goods such as the Apple Watch and AirPods headphones. Retailers such as WalMart and Target risk being swept up in an escalating trade war if further tariffs hit a broad range of consumer goods, from TVs to sneakers.

Efforts to end the trade dispute have fizzled so far. Officials from both countries have met four times for formal talks, most recently in August, when Treasury’s undersecretary for international affairs, David Malpass, led discussions in Washington with Chinese Vice-Minister Wang Shouwen.

The White House has sought to pressure Beijing to reduce its trade surplus with America and protect intellectual property rights of US companies, which it says are abused in China.