WASHINGTON (BLOOMBERG) - President Donald Trump has decided to withdraw from the Open Skies treaty, an arms-control pact designed to promote transparency between US and Russia, claiming Russian violations.

“Russia didn’t adhere to the treaty,” Trump told reporters at the White House on Thursday (May 21). “Until they adhere, we’ll pull out.”

Secretary of State Mike Pompeo said the United States will officially inform Russia on Friday that the US plans to exit the 35-country agreement, which gives nations permission to traverse each other’s airspace to collect information on military activities.

The move will take effect in six months, Pompeo said in a statement, adding that the US could “reconsider our withdrawal should Russia return to full compliance with the Treaty.”

Trump said on Thursday that after the US withdraws, Russia will want to negotiate.

“I think what’s going to happen is we’re going to pull out and they’re going to want to make a deal,” the president said.

Withdrawing from the pact will leave one arms control treaty between the US and Russia: New START, which limits the number of nuclear missiles each nation can deploy. It expires in February 2021.

Trump’s decision to exit the Open Skies pact suggests he could make a similar decision on New START as leverage to broker a new arms-control deal. The president said his policy is to leave agreements the other party does not follow.

Pompeo noted Russia has blocked the US from conducting surveillance flights around areas near Georgia and Kaliningrad on the Baltic Sea, which are permitted under the treaty and Moscow denied overflights of Russian military exercises. Those American complaints have been longstanding.

“Russia has refused access to observation flights within a 10km corridor along its border with the Russian-occupied Georgian regions of Abkhazia and South Ossetia, thereby attempting to advance false Russian claims that these occupied territories are independent states,” Pompeo said.

The Trump administration has also concluded that Russia has used flights over the US and Europe to identify critical infrastructure that could be targeted for military attacks, administration officials said.

“We reject any efforts to justify the withdrawal from this fundamental agreement on the basis of some technical problems,” Grushko said. “Nothing prevents us from continuing to discuss these technical issues which the US is trying to present as some violation by Russia.”

The treaty allows countries to conduct unarmed surveillance flights with little notice. It was designed to promote trust between Nato and Eastern bloc countries following the Cold War and reduce the chances of armed conflict. 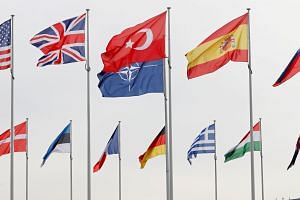 Senior administration officials said that US allies were consulted before the decision was reached, but did not say whether other countries urged Washington to remain in the pact. The decision could anger European signatories that have openly supported the treaty.

“President Trump is barrelling down a path that ultimately makes us less secure and cedes US global leadership,” said Senator Jeanne Shaheen, a Democratic member of the Armed Services Committee.

“The dangerous and misguided decision to abandon this international agreement cripples our ability to conduct aerial surveillance of Russia, while allowing Russian reconnaissance flights over US bases in Europe to continue.”

The move follows Trump’s decision last year to pull out of the Intermediate-Range Nuclear Forces Treaty, a Cold War pact banning short- and medium-range missiles, as well as the Iran nuclear agreement.

A senior Trump administration official held a call with a Russian counterpart to discuss a new nuclear arms control pact in recent days, according to the officials.

The two sides agreed to meet in person to further discuss the framework of a deal once such a gathering is possible, though officials said the meeting might have to take place via video link due to the coronavirus pandemic.

Trump has pushed for a new nuclear arms agreement with Russia and China, whose nuclear arsenal is only a fraction of the size of Washington’s and Moscow’s but which the US claims is growing.

“We look forward to negotiating with both Russia and China on a new arms control framework that moves beyond the Cold War constructs of the past and helps keep the entire world safe,” White House national security adviser Robert O’Brien said in a statement.

Beijing has repeatedly rejected the idea of participating in trilateral nuclear arms control talks with the US and Russia.