WASHINGTON (WASHINGTON POST) - US President Donald Trump will sign an executive order Friday (Oct 11) authorising sanctions against Turkish government officials and entities if Turkey's incursion in Syria results in human rights violations, destabilises the region, or leads to the escape of a "single ISIS fighter," the Treasury Department announced.

Treasury Secretary Steven Mnuchin told reporters that there was no immediate plan to impose sanctions, but said they will be used "when necessary."

The order came as the administration stepped up its criticism of Turkey's military operation against US-allied Syrian Kurdish fighters, amid harsh criticism of Trump's failure to prevent the incursion.

The Kurds, considered terrorists by Turkey, have played the leading role in ground combat, under US air protection, against the Islamic State in Syria, also known as ISIS.

Lawmakers of both parties have questioned whether Trump gave Turkey a "green light," and called on him to press Turkish President Recep Tayyip Erdogan to stop the operation.

Trump said after a Sunday telephone call with Erdogan that he was informed of the Turkish operation, and had ordered US forces to withdraw from the target area.

Since then, the administration has been at pains to make clear it does not support the incursion, calling it a "bad idea" and pressing the Turks to stop.

"We oppose and are greatly disappointed by Turkey's decision to launch a unilateral military incursion into northern Syria," Defense Secretary Mark Esper said at a Friday news conference.

In addition to putting US partners "in harms way," he said that it "risks the security of (prisoner) camps and will put the region in danger." 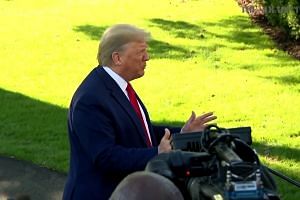 Trump suggests US could mediate 'deal' between Turks and Kurds

Need to de-escalate situation in north-east Syria before it becomes 'irreparable': Pentagon

France says EU sanctions against Turkey 'on the table'

Esper insisted, as have other officials, that anti-ISIS operations by the Kurdish-dominated Syrian Democratic Force outside the incursion zone have not stopped, and that no prisoners were known to have escaped.

He and General Mark Milley, chairman of the Joint chiefs of Staff, said that Turkey continued air and artillery attacks on a zone about 20 miles deep along the northeastern Syrian border, and that ground forces have entered up to 6-7 miles into Syria in some places.

They said that the United States had "repositioned" an unspecified number of US troops in the region to provide force protection for about 1,000 American troops currently based in eastern Syria.

Kurdish forces have, until many took off for the front lines against Turkey, provided protection for US installations.

In statements Thursday, Trump said that options for dealing with the situation included sending in "thousands" of American forces, a proposal he rejected; imposing severe economic sanctions on Turkey; or providing US mediation between Turkey and the Kurds.

Of those options, the president said he favoured sanctions.

Turkish officials said they are not interested in mediation.

In a meeting Friday with reporters, Sedar Kilic, the Turkish ambassador to the United States, said that his government had no intention of "slaughtering" Kurdish fighters, as some US lawmakers have alleged, but that it was determined to bring an end to Kurdish occupation of the border area and would not stop until it had reached its goals.

As has Erdogan and other Turkish officials, Kilic expressed puzzlement and no small amount of exasperation at US refusal to recognise the danger posed by the Kurdish fighters and their political movement, which he said was "trying to carve out a Marxist-Leninist state."

Most Kurds in Syria, he said, did not support the movement, or the fighters.

He said that Turkey's operations were defensive and legal under the charters of both the United Nations and Nato, to which to which Turkey belongs.