WASHINGTON (REUTERS) – The White House on Monday (March 26) cast aspersions on adult-film star Stormy Daniels over a much-watched TV interview in which she said she was threatened with violence to keep quiet about an alleged sexual encounter with Donald Trump in 2006.

White House spokesman Raj Shah said at the daily White House briefing, “The president doesn’t believe any of the claims Ms Daniels made in the interview last night were accurate.”

The number of Americans watching the long-running show more than doubled to 21.3 million, CBS Corp said, scoring an 111 per cent increase over last week’s programme. It was the biggest audience for 60 Minutes since a Nov 16, 2008 post-election interview with Barack and Michelle Obama.

Shah, asked whether Trump believed Daniels, whose real name is Stephanie Clifford, was threatened, said, “No, he does not.”

“There’s nothing to corroborate her claim,” the spokesman said.

He said Trump had “consistently denied these allegations” of a sexual relationship with Daniels. 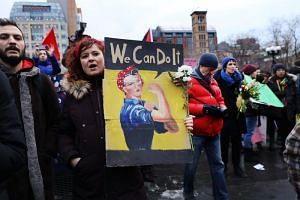 Stormy waters ahead for US culture of buying silence

The TV appearance by Daniels, who is suing Trump over the matter, also prompted a denial from the president’s personal lawyer, Michael Cohen, that the attorney was involved in the alleged threat against Daniels, in a “cease-and-desist” letter sent shortly after the interview aired.

A copy of the letter, sent to Daniels’ lawyer, Michael Avenatti, by Cohen’s attorney, Brent Blakely, was seen by Reuters on Monday (March 26).

“Mr Cohen had absolutely nothing whatsoever to do with any such person or incident, and does not even believe that any such person exists, or that such incident ever occurred,” the letter said.

Daniels had implied Cohen was behind the threat of harm if she did not “leave Trump alone,” which she said was made by a stranger in a Las Vegas parking lot in 2011.

The letter also demanded “that you immediately retract and apologize to Mr Cohen through the national media for your defamatory statements on ‘60 Minutes,’ and make clear that you have no facts or evidence whatsoever to support your allegations that my client had anything whatsoever to do with this alleged thug.”

Daniels sued Trump on March 6, saying he never signed an agreement for her to keep quiet about an “intimate” relationship between them in 2006.

Daniels attorney Avenatti said on NBC on Monday morning that the man who threatened his client while she was with her infant daughter was not Cohen but that “it had to be someone that is related to Mr Trump or Mr Cohen.”

The 60 Minutes segment followed an interview aired last week on CNN with former Playboy model Karen McDougal, who described a 10-month-long affair with Trump starting in 2006.

Trump would have been married to his wife, Melania, during both alleged relationships.  In addition to repeatedly denying that Trump had sex with Daniels, the White House has said he denies having an affair with McDougal.

In filings with the Justice Department and Federal Election Commission, watchdog groups have said the payment amount may have exceeded campaign-contribution limits and violated US law.