WASHINGTON (AFP) - US President Donald Trump said he would "prefer" to keep his embattled deputy attorney-general Rod Rosenstein - who oversees the Russia collusion probe - but that he might delay a politically risky decision on the official's fate originally expected for Thursday (Sept 27).

However, Mr Trump said that a meeting scheduled for Thursday at the White House between him and Mr Rosenstein might be put off, because of the focus on a separate political drama over his Supreme Court pick Brett Kavanaugh.

"I may call Rod tonight or tomorrow and ask for a little bit of a delay to the meeting," Mr Trump said.

Doubts over how long Mr Rod Rosenstein can keep the job have been swirling since shock US media reports that he once suggested secretly recording Mr Trump to collect evidence for ousting him under a constitutional amendment for presidents unfit to remain in office.

This Monday, Mr Rosenstein was widely rumoured to be on the point of being fired or handing in his resignation when he arrived for a meeting with the White House chief of staff.

But in an unpredictable series of events, he emerged from the meeting still with his job and the White House announcing that Mr Trump would see Mr Rosenstein in person on Thursday on returning from the annual gathering of world leaders at the United Nations.

Mr Trump indicated on Wednesday that Mr Rosenstein - who has dismissed the media reports as inaccurate - had gone a long way in persuading him.

"I'm talking to him. We've had a good talk. He said he never said it," Mr Trump said. "He said he has a lot of respect for me."

Quite apart from the lurid claims of backroom plotting, Mr Rosenstein matters because he plays a key role in overseeing the Russia investigation. 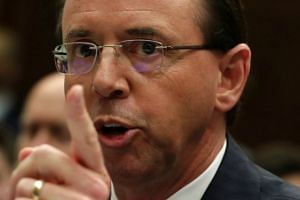 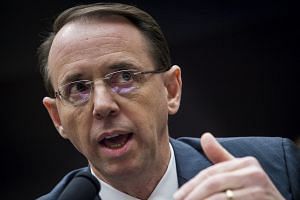 Top US official in Russia probe suggested taping Trump in bid to force him from office: Reports

Trump says he had ‘good talk’ with Rosenstein; no plans to fire him

Mr Trump is infuriated by what he says is Special Counsel Robert Mueller's "witch hunt" into whether Russia conspired with Mr Trump's campaign during his shock 2016 election win.

The President has frequently criticised Mr Rosenstein, who has been steadfast in trying to protect Mr Mueller as the probe digs ever deeper into Mr Trump's inner circle.

So Mr Rosenstein's departure - possibly putting someone more pliable in his place - would set off alarm bells over the future independence of a probe which has the potential to rock the entire Trump presidency.

Mr Trump has made no secret of his readiness to take on what he sees as a politicised, hostile Justice Department and FBI.

Just last Friday, Mr Trump referred in a speech to supporters to a "lingering stench" at the Justice Department that he would soon eradicate.

But if events would seem to point to Mr Rosenstein being pushed out, both Democrats and Mr Trump's Republicans have urged caution.

Even allies say that nothing should be done before the November mid-term congressional elections in six weeks, arguing that the ensuing row would fuel expected Democratic momentum for making gains in the legislature.

If the Democrats overturn the current Republican majorities in the Lower House and even Senate, then aggressive committee investigations and even calls for impeachment might follow.

Some speculate the Rosenstein story was planted to undermine both the deputy attorney-general and Mr Mueller, giving Mr Trump a legitimate excuse to do what he'd wanted to do all along.

But amid ever deepening paranoia and partisan division in Washington, others ask if the story wasn't leaked to trap Mr Trump, trying to bait him into ousting the official - thereby plunging his administration into new controversy.