WASHINGTON (REUTERS) - A woman who has accused President Donald Trump’s Supreme Court nominee Brett Kavanaugh of sexual assault decades ago has not yet agreed to testify at a US Senate hearing set for next Monday (Sept 24), raising questions about whether the high-stakes public showdown will take place.

Christine Blasey Ford, a university professor in California whose allegations have put Kavanaugh’s once-safe nomination in jeopardy, has not responded to attempts by the Republican-led Senate Judiciary Committee to contact her about appearing at the hearing, committee Chairman Chuck Grassley said on Tuesday.

Trump stepped up his defence of Kavanaugh and expressed sympathy towards his nominee, who met with officials at the White House for a second straight day though not with the president.

“I feel so badly for him that he’s going through this, to be honest with you,” Trump told a news conference. “... This is not a man that deserves this.”

“Hopefully, the woman will come forward, state her case. He will state his case before representatives of the United States Senate. And then they will vote,” Trump added.

The hearing represents a potential make-or-break moment for the conservative federal appeals court judge’s confirmation chances for the lifetime post on the top US court, as Trump pursues his goal of moving the federal judiciary to the right.

Ford has accused Kavanaugh of trying to attack her and remove her clothing while he was drunk in 1982 in a Maryland suburb outside Washington when they were students at different high schools. Kavanaugh has called the allegation “completely false.”

Republicans control the Senate by only a narrow margin, meaning any defections within the party could sink the nomination and deal a major setback to Trump.

“We just don’t know what happened 36 years ago and there are gaps in her memory. She doesn’t know how she got there, when it was, and so that would logically be something where she would get questions,” Cornyn told reporters.

The confirmation fight comes just weeks before the Nov 6 congressional elections in which Democrats are seeking to take control of Congress from Trump’s fellow Republicans, which could be a major blow to his agenda.

Grassley, whose committee oversees the confirmation process, initially said the planned hearing would be public but other Republicans indicated it could be held privately if Ford requests that.

Chuck Schumer, the top Senate Democrat, urged Republicans not to “rush the hearings.”

Democrats, already fiercely opposed to the nominee, wrote a letter to Grassley objecting to the planned format of the hearing, which was announced on Monday, including having just Kavanaugh and Ford as witnesses.

‘DESERVES TO BE HEARD’

“We have reached out to her in the last 36 hours, three or four times by email, and we’ve not heard from them. So it kind of raises the question ... do they want to come to (the) public hearing or not?” Grassley said in an interview with conservative radio host Hugh Hewitt.

“I want to hear from Dr Ford,” Grassley said. “And she deserves to be heard because these are serious accusations. And I would surely hope she’d come Monday.” 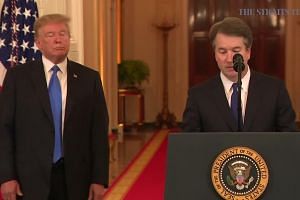 Ford detailed her allegation in a letter sent in July to Senator Dianne Feinstein, the committee’s top Democrat. The letter’s contents leaked last week and Ford identified herself in an interview with the Washington Post published on Sunday that included details about the alleged assault.

Debra Katz, a lawyer representing Ford, said in television interviews on Monday that the professor would be willing to testify and called the alleged incident “attempted rape.”

Katz did not respond to Reuters requests for comment.

Democrats have so far also refused to cooperate with the committee’s Republican leadership. They have asked that the FBI conduct an investigation, a request that Republicans have rebuffed. Trump and other Republicans said they do not think the FBI needs to be involved.

Feinstein said there should be more than just two witnesses, possibly to include people who Ford previously confided in. The committee’s Democrats said witnesses should include Kavanaugh’s friend Mark Judge, who Ford has said witnessed the alleged incident.

A lawyer representing Judge sent a letter to Grassley saying Judge does not want to speak publicly about the matter.

“In fact, I have no memory of this alleged incident. Brett Kavanaugh and I were friends in high school but I do not recall the party described in Dr. Ford’s letter. More to the point, I never saw Brett act in the manner Dr. Ford describes,” the letter quoted Judge as saying.

Judge is the author of a 1997 memoir titled “Wasted: Tales of a Gen X Drunk,” which recounts his experiences as a teenage alcoholic.

“I believe Dr Ford. I believe the survivor here,”Blumenthal said. “... She has come forward courageously and bravely, knowing she would face a nightmare of possible and vicious scrutiny.”

Republican staffers quizzed Kavanaugh about the allegations on a call on Monday evening in which the Democrats refused to participate. Committee spokesman Taylor Foy said other witnesses would be questioned ahead of the hearing.

The showdown has echoes of current Supreme Court Justice Clarence Thomas’ contentious confirmation hearings in 1991 involving sexual harassment allegations lodged against him by a law professor named Anita Hill. Thomas, the court’s second black justice, was ultimately confirmed, but only after a nasty televised hearing in which Hill faced pointed questions from Republican senators and the nominee said he was the victim of “a high-tech lynching for uppity blacks.”

Grassley offered his assurance that Ford would be treated respectfully and not badgered during the hearing. All 11 Republicans on the committee are men. Four of the Democrats are women.