UNITED NATIONS (AP) - Mr Donald Trump, who orchestrated a spur-of-the-moment June encounter with Mr Kim Jong Un that saw him become the first US president to set foot in North Korea, said Monday (Sept 23) that another meeting with the North Korean leader "could happen soon."

Mr Trump provided few details, and it wasn't clear what officials were doing behind the scenes to set up a meeting meant to address a diplomatic impasse over the North's development of nuclear-armed missiles targeting the US mainland.

But Mr Trump's comments, even with few specifics backing them up, are tantalising because there is extreme interest, especially in Japan and South Korea, in whether Mr Trump and Mr Kim can strike a deal on one of the world's most pressing standoffs.

Mr Trump has also proven that he's willing to take risks with North Korea that no other US leader has taken, even as critics say his summitry captured the world's attention but got few concrete results.

Asked on the sidelines of annual General Assembly meetings at the United Nations in New York what it would take for another Kim summit, Mr Trump said: "We'll see. Right now, people would like to see that happen. I want to know what's going to be coming out of it. We can know a lot before the summit takes place."

Mr Moon said the Trump-Kim meeting at the Korean border in June was a "historic moment."

Mr Moon said he expects that negotiations between the United States and North Korea will resume soon and there will be another summit. 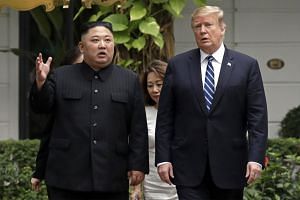 At the heart of the Washington-Pyongyang dispute is the impoverished North's desire for relief from harsh sanctions imposed as it has boosted its nuclear and missile capabilities.

Washington, however, is demanding that Pyongyang first take more comprehensive steps to dismantle a nuclear program that has been painstakingly built over decades.

In recent months, the North has displayed its unhappiness with the tough US stance in a series of short-range weapons tests that experts see as an attempt to increase pressure on Washington and Seoul and build leverage ahead of any new talks.

Mr Trump has repeatedly played down tests of weapons that could strike allies South Korea and Japan, which host tens of thousands of US troops. He also has trumpeted the strength of his rapport with Mr Kim.

"The relationship has been very good," Mr Trump said again Monday. "We'll see what happens. But we'd like to see if we can do something. And if we can, that would be great. And if we can't, that's fine."

North Korea reportedly hasn't sent its top diplomat to the UN meetings, making the Moon-Trump talks potentially the highest-level diplomatic opportunity to make progress this week on the nuclear standoff.

During that first summit with Mr Kim in Singapore, Mr Trump became the first sitting US president to meet with a North Korean leader.

Asked about those talks, which critics have called more surface than substance, Mr Trump said, "People don't give that meeting as much credit as it deserves and the relationship we established. It was a tremendous success."

Mr Trump is set to speak before the UN General Assembly on Tuesday, two years after he used that podium to deride Mr Kim as "Little Rocket Man" and to threaten to destroy North Korea.

The second Kim-Trump summit in Hanoi, Vietnam, collapsed in February. The leaders then met briefly in June at the Korean border, where Mr Trump unexpectedly stepped into the North. Since then, there has been little apparent progress.

In recent days, however, North Korea has praised Mr Trump for saying Washington may pursue an unspecified "new method" in nuclear negotiations as well as for his decision to fire his hawkish former national security adviser John Bolton.

North Korea also has hinted that some sort of diplomacy could soon resume, but it says it will not consider abandoning its nuclear weapons unless external threats are removed. The North says annual US-South Korean military drills and the huge presence of American troops in the region are proof of US hostility toward Pyongyang.