North Korea fired missiles for the third time in eight days, a series of launches that analysts say have appeared designed both to improve military capabilities and pressure the United States and South Korea as they seek to restart denuclearisation talks with Pyongyang.

North Korea has been testing missiles despite a June 30 meeting between Trump and Kim at which the two agreed to revive stalled talks, which have yet to resume.

Trump has played down North Korea missile launches since his failed summit with Kim in Vietnam in February, saying they were of short-range devices, not the intercontinental ballistic missiles and nuclear bombs Kim has promised not to test.

"These missiles tests are not a violation of our signed Singapore agreement, nor was there discussion of short range missiles when we shook hands. 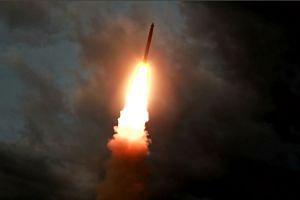 Trump continued to laud the personal rapport he says he has with Kim, whose government has been criticised by the US State Department for subjecting its people to "egregious violations of human rights and fundamental freedoms."

The department said in May that about 100,000 people were held in political prison camps.

"I may be wrong, but I believe that Chariman Kim has a great and beautiful vision for his country, and only the United States, with me as President, can make that vision come true. He will do the right thing because he is far too smart not to, and he does not want to disappoint his friend, President Trump!"