TAMPA, FLORIDA (AFP) - US President Donald Trump suggested on Tuesday (July 31) that talks with arch foe Iran were imminent, despite silence from the Islamic republic’s leaders to his offer for a meeting.

Scepticism was rife in Iran over possible talks, with one lawmaker saying negotiations would be a “humiliation”.

The country’s top leaders did not give an immediate response to Mr Trump’s statement a day earlier that he would meet them “any time” without preconditions.

“I have a feeling they’ll be talking to us pretty soon,” Mr Trump told a rally in Tampa, Florida, before adding: “And maybe not, and that’s OK too.”

He also used the occasion to again blast the “horrible, one-sided” 2015 nuclear deal between Iran and world powers from which the American President withdrew.

“It’s a horror show,” Mr Trump said. “I hope it works out well with Iran. They are having a lot of difficulty right now.”

The US is set to start reimposing full sanctions on Iran from Aug 6 – a move that has already contributed to a major currency crisis with the rial losing two-thirds of its value in six months.

Several Iranian public figures said it was impossible to imagine negotiations with Washington after it tore up the nuclear deal in May. 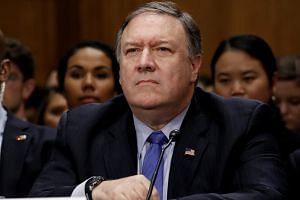 No plans for Pompeo to engage with Iran at Asean meeting: US official

“With the contemptuous statements (Mr Trump) addressed to Iran, the idea of negotiating is inconceivable. It would be a humiliation,” said Mr Ali Motahari, deputy speaker of Parliament, according to the conservative Fars News.

Interior Minister Abdolreza Rahmani Fazli said: “America is not trustworthy. After it arrogantly and unilaterally withdrew from the nuclear agreement, how can it be trusted?”

Only last week, Mr Trump fired off an all-caps tirade at his counterpart Hassan Rouhani on Twitter, warning of untold “suffering” if Iran continued to threaten the United States.

Many in Iran are therefore suspicious of his latest volte-face. “We cannot negotiate with someone who violates international commitments, threatens to destroy countries, and constantly changes his position,” said analyst Mohammad Marandi, of the University of Teheran, who was part of the nuclear negotiating team.

“Negotiations with the United States must not be a taboo,” said Mr Heshmatollah Falahatpisheh, head of Parliament’s foreign affairs commission, in an interview with the semi-official ISNA news agency.

“Trump understands that he does not have the capacity to wage war with Iran, but due to historic mistrust, diplomatic ties have been destroyed,” said Mr Falahatpisheh, adding that this left no choice but to work towards reducing tensions.

Mr Motahari added that hardliners, who have long opposed any rapprochement with the US, share the blame for the collapse of the nuclear deal.

“If the whole Iranian system had worked to implement this agreement, today we would be witnessing the presence of European companies in Iran and their investments, and even Trump would not be able to withdraw so easily from the deal,” he said. “But from the start one part of the system did not want the agreement to work.”

On the streets of Teheran, meanwhile, the focus remained resolutely on Iran’s domestic economic difficulties.

“All of us believe that Trump is the enemy of Iran and Iranian people. But now maybe Trump wants to give the Iranian people an opportunity and, God willing, it could be a way to get past our disastrous situation,” said Ms Hushiar, an office manager in her 50s.

Many Iranians find it hard to believe that the man who is trying to destroy their economy, and has banned them from flying to the US, can be trusted.

“If they are honest in their words that they want to have negotiations with us without any preconditions, at least they should stay in the JCPOA (nuclear deal) or they should let us get the benefits of European trade,” said Mr Morteza Mehdian, a software engineer in his 20s.

“But the reality is this man is a liar and we cannot trust his word.”

For now, this is also the official line, with Iran’s supreme leader Ayatollah Ali Khamenei saying earlier this month that talking to Mr Trump would be “useless”.

Foreign Ministry spokesman Bahram Ghasemi on Monday said “there is no possibility for talks”, ahead of Mr Trump’s statement.

The Trump administration says its “maximum pressure campaign” is designed to force Iran into a new deal that goes beyond limiting its nuclear programme and includes curbs to its regional behaviour and missile programme.