Mr Trump's remark at a political rally on Wednesday (Aug 1) in Tampa, Florida, was the latest sign of friction between the US and North Korea, as they attempt to implement on Mr Kim's June 12 agreement to "work toward complete denuclearisation".

The President made the claim during a long defence of his trade war with China.

"We are doing well in North Korea, although I happen to think that we're doing so well with China that China maybe is getting in our way," Mr Trump said, noting that Mr Kim has continued to refrain from launching missiles.

"No tests. No rockets flying. We'll see what happens."

Mr Trump didn't provide details on how China was interfering in the nuclear talks.

It wasn't the first time Mr Trump has suggested that China was relaxing pressure on North Korea amid the simmering trade dispute. 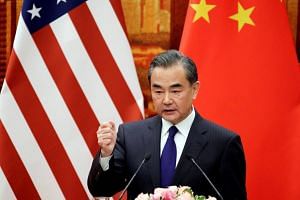 Trump-Kim summit: US President says his agreement with North Korean leader will be good for China

After his summit with Mr Kim in Singapore, Mr Trump acknowledged that his trade disputes could discourage Chinese President Xi Jinping's cooperation, saying "the border is more open than it was when we first started".

Besides being the US's largest trading partner, China is arguably the most important player in Mr Trump's "maximum pressure" campaign to force Mr Kim to give up his nuclear arsenal.

After an April 2017 meeting at the President's Mar-a-Lago home, Mr Xi supported successive rounds of United Nations sanctions and clamped down on border trade with North Korea.

China has so far avoided publicly conflating the disputes over trade and North Korea.

The government has said only that the UN Security Council - where China and the US both wield vetoes - should revisit sanctions after Mr Kim's meeting with Mr Trump.

Since the Singapore summit, independent researchers and US intelligence reports published by news organisations have suggested that North Korea is still expanding its weapons programme.

The regime has continued to assemble intercontinental ballistic missiles at a plant near Pyongyang, the Washington Post reported on Monday, citing people familiar with US intelligence.

Mr Trump told the rally that he had a good relationship with Mr Kim.