WASHINGTON (BLOOMBERG) - President Donald Trump rejected Apple's bid to avoid tariffs on some computer parts it manufactures in China, saying the company should instead make the components in the US.

The Cupertino, California-based technology giant has asked the Trump administration to exclude key components that make up the forthcoming Mac Pro high-end desktop computer from 25 per cent import tariffs, weeks after planning to relocate production of the line to China from Texas.

An Apple spokesman declined to comment, but the company previously said that "final assembly is only one part of the manufacturing process."

Apple has not announced plans to assemble products in Texas but has said it will expand its local headquarters in the state.

The new Mac Pro will be manufactured in China, a person familiar with the company's plans said last month, shifting production of what had been Apple's only major device assembled in the US.

Apple's request for a tariff exemption confirms that plan. 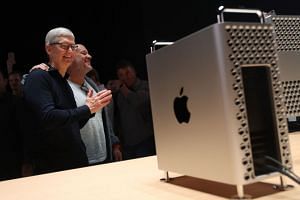 The previous design had been built in Texas since 2013, making it the only major Apple product exclusively built in the US. The new model was announced in June and will go on sale later this year, starting at US$5,999 (S$8,000).

Apple filed requests for exclusions from the 25 oer cent tariff on 15 components or products. There's an open comment period until Aug 1 before the administration would consider the requests, and the company has seven days to reply to each comment.

The requests have started to draw opposition from the public. An online comment posted by Bill Smith said Apple willingly elected to move production to China knowing that tariffs were in place.

"If Apple wishes to avoid tariffs it should continue to manufacture in the US," Smith wrote. "If it does not want to pass the cost of tariffs onto the consumer, Apple can hold its prices constant."

The Mac Pro has historically been one of Apple's lowest volume computers, and given its already high price point, the tariffs on this particular product shouldn't have a significant impact on Apple's bottom line. The company reports earnings on July 30 and company executives are likely to be asked about Apple's supply chain in light of trade tensions between the US and China.

Apple is also seeking duty exclusions on its Magic Mouse and Magic Trackpad, complementary devices for operating the computer, as well as an accompanying USB cable for charging external mobile devices. Apple earlier had products spared from duties, including the Apple Watch and AirPods, while the iPhone, the company's core product, hasn't yet been significantly impacted.

Trump slapped tariffs on US$250 billion in Chinese goods last year, launching a trade war over longstanding US allegations of unfair economic practices, including the theft of American intellectual property.

After the president threatened to impose tariffs on an additional US$300 billion in Chinese goods, Apple said in a letter last month that they would affect nearly all major Apple products and reduce the company's contribution to the economy. Those additional tariffs haven't been imposed yet.

The administration has previously promised relief if companies can show that parts or products can only be obtained in China, aren't "strategically important" to Chinese industrial programs or that the duties would cause "severe economic harm."

Apple shares dipped briefly following the tweet and mostly recovered. They were up less than 1 per cent at 10.16am in New York.