WASHINGTON (REUTERS) - United States President Donald Trump on Sunday (July 28) said the disparaging comments he made about a prominent African-American lawmaker and his Baltimore district were not racist and, without citing any evidence for his claim, called the congressman a racist.

"If racist Elijah Cummings would focus more of his energy on helping the good people of his district, and Baltimore itself, perhaps progress could be made in fixing the mess that he has helped to create over many years of incompetent leadership," Mr Trump said in a tweet.

Mr Trump had attacked Mr Cummings, a Democrat in the House of Representatives who has long been a champion for civil rights, in a series of tweets last Saturday, after the lawmaker criticised conditions at US facilities housing migrants along the Mexican border.

"No human being would want to live there," he said.

The tweets drew pointed responses from Democrats, who said the comments were racist, a charge Mr Trump denied on Sunday.

"There is nothing racist in stating plainly what most people already know, that Elijah Cummings has done a terrible job for the people of his district, and of Baltimore itself," he said in a series of posts on Twitter.

Mr Cummings' office did not immediately respond to a request for comment on Mr Trump's latest tweets. In a tweet last Saturday responding to Mr Trump's initial barrage, Mr Cummings said: "Mr President, I go home to my district daily. Each morning, I wake up, and I go and fight for my neighbours. It is my constitutional duty to conduct oversight of the Executive Branch. But, it is my moral duty to fight for my constituents." 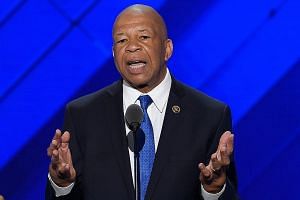 'He always doubles down': Inside the political crisis caused by Trump's racist tweets

Trump defiant as lawmakers blast his 'racist' attacks on 4 congresswomen

Mr Cummings is the chairman of the House Oversight Committee, which voted 23-16 along party lines on Thursday to issue subpoenas to White House officials, including Mr Trump's daughter Ivanka Trump and son-in-law Jared Kushner as part of a probe into possible violations of government record-keeping laws.

In an interview on CBS' Face The Nation, acting White House chief of staff Mick Mulvaney said on Sunday that he understood why Mr Trump's comments could be perceived as racist, but said the President was speaking hyperbolically.

Mr Trump's remarks echoed a similar attack he made in January 2017 against another black lawmaker and icon of the civil rights movement, Mr John Lewis. He also recently told four minority women lawmakers to "go back and help fix the totally broken and crime infested places from which they came from".

Democratic presidential candidate Julian Castro told Face The Nation: "I absolutely think it's important to call it out for what it is, which is racism.

Mr Cummings represents Maryland's 7th congressional district, which according to 2010 census data was 54.6 per cent black, had a median household income of US$51,018 (S$69,970), a figure above the median income for the nation as a whole.