WASHINGTON (AFP) - The Trump administration is seeking the conservative-leaning Supreme Court's endorsement to kill the "Dreamers" programme, which protects about 1.8 million undocumented immigrants who arrived in the United States as children.

Late on Monday (Nov 5), the Justice Department announced it was bypassing regional appellate benches and going straight to the high court to gain support for its effort to end the Obama-era Deferred Action for Childhood Arrivals (DACA) programme.

The move came on the eve of midterm congressional elections in which Trump and Republicans portrayed illegal immigration as a threat to US security.

Solicitor-General Noel Francisco said injunctions by three lower courts have prevented the administration from ending the programme, which the Trump administration says has only encouraged people to try to enter the United States illegally.

Cancelling the programme could result in the expulsion of hundreds of thousands of people who have grown up inside the United States after being brought into the country illegally as children years and sometimes decades ago.

Many of them now have families and jobs of their own and are well integrated into US society.

The government argues that the injunctions have prevented the Department of Homeland Security from moving ahead with Trump's September 2017 order to rescind the DACA policy. 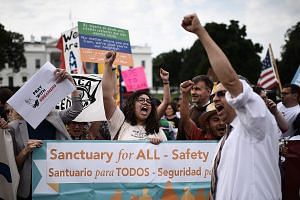 The policy, put into place by former president Barack Obama, protected from deportation 700,000 "Dreamers" registered under the programme and another 1.1 million who qualify but are not registered.

"The last administration started DACA without a mandate or even an authorisation from Congress or the courts; this administration can therefore end DACA at any time," Attorney-General Jeff Sessions said in a statement.

Earlier this year, the Republican-led Congress failed to pass immigration reform proposals which could have resolved the legal status of those qualified for DACA, possibly offering a clear path to citizenship.

The lower court rulings left the 700,000 protected but prevented any more from registering for the programme.

In the meantime, Trump has been able to add another conservative justice to the Supreme Court, Brett Kavanaugh, who was approved in early October.

That leaves the conservatives with a solid five-to-four majority in the high court, elevating the chance the Trump administration could win support for its stance on DACA.