WASHINGTON (NYTIMES) - President Donald Trump pushed ahead with plans to impose tariffs on Mexico over the objections of several top advisers, including his son-in-law Jared Kushner, opting to side with hard-line officials who were advocating the move, according to multiple administration officials and people briefed on their plans.

For several weeks, Mr Trump's top economic advisers have been urging the President not to use tariffs to punish Mexico for failing to stop the flow of migrants into the United States.

Mr Kushner, along with Treasury Secretary Steven Mnuchin and Mr Trump's top trade negotiator Robert Lighthizer, has warned the move would imperil the President's other priorities, such as passage of a revised North American trade agreement with Canada and Mexico.

But in recent weeks, Mr Trump, whose anger toward Mexico had steadily grown, brought up the idea of using tariffs, and the issue had been raised in a number of meetings on trade or immigration, these people said, speaking on the condition of anonymity to discuss private conversations.

His frustration had been building since January, when Democrats refused to fund his wall along the south-western border.

In March, Mr Trump moved to cut off all foreign aid to Guatemala, Honduras and El Salvador and then threatened to close the border entirely, before being talked down by advisers who said the disruption in the flow of goods and people could have severe consequences for the economy.

Last week, as headlines about Mr Trump's attempts to interfere in the special counsel's Russia investigation once again swirled, the President's irritation boiled over. In a meeting last Wednesday night (May 29) in the Oval Office, with Mr Kushner dialling in from the Middle East, the President lost patience with aides he saw as slow-walking his request and decided tariffs would be going into effect.

Among their arguments was that Mexico had done nothing to solve the problem and that it was unlikely to act without economic pressure. Tariffs, they argued, would hurt Mexico's economy and put pressure on its government to finally take action.

Mr Trump had made clear in several meetings that he wanted to move ahead, and the White House had started preparing paperwork weeks before.

"I want to do this," Mr Trump would say when aides raised concerns. 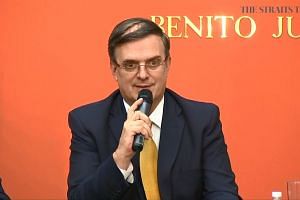 Mexico, US business groups urge Trump to back down on tariff threat

While many of his advisers believed the move was risky and could hurt US consumers, businesses and the stock markets, few wanted to directly challenge the President.

Mr Lighthizer, the US trade representative, voiced concern about the impact on ratifying the newly negotiated pact, known as the United States-Mexico-Canada Agreement, but he ultimately viewed his role as carrying out Mr Trump's decision.

Mr Mnuchin privately believed the tariffs could derail the pact, complicate Washington's rocky trade negotiations with China and risk unsettling stock markets, but in the end his objections were mostly about timing. Mr Larry Kudlow, a noted free trader who leads the National Economic Council, was undergoing surgery for a hip replacement and was not present for key discussions.

"Ambassador Lighthizer never argued against the President's tariff plan and agrees that this strong action is needed to resolve the longstanding, serious immigration crisis," said a spokesman for the US trade representative.

The President's decision to impose the tariffs sent aides scrambling. Last Thursday morning during a trip to Guatemala, acting Department of Homeland Security Secretary Kevin McAleenan was briefed on the White House's coming announcement, causing him to be about 40 minutes late to a breakfast hosted by the US ambassador to the country.

As Mr McAleenan ate, top aides in the department called White House officials to learn more about the plan and to find out if it was actually a done deal. At about 2pm, top officials in the agency were still unclear if the President would follow through.

Inside the White House, Mr Trump's advisers tried to at least buy more time to try to secure a commitment from Mexico. At a meeting last Thursday, Mr Mnuchin and other advisers persuaded the President to wait until June 10 before imposing the tariffs, in hopes that they could get Mexico to do something before then.

Mr Trump agreed. Last Thursday evening, he announced on Twitter that he would use emergency powers to impose a 5 per cent tariff on June 10 and said that amount would increase to as much as 25 per cent "until the illegal immigration problem is remedied."

The announcement took both businesses and Republican lawmakers by surprise. According to congressional aides, most lawmakers found out about the policy after Mr Trump's tweet.

That appeared to include Republican Senator Chuck Grassley, leader of the powerful Finance Committee, who quickly issued a statement to condemn the move, calling it a "misuse of presidential tariff authority and counter to congressional intent".

Last Friday, White House press secretary Sarah Huckabee Sanders pushed back against the suggestion that the administration had blindsided members of its own party, saying it notified several Republican lawmakers before making the move.

And she defended the decision as necessary to getting Mexico to take action, telling Fox News that the administration had for months sought help from Mexico.

"The President has been asking them for months to do that," she said. "Now he is putting some measures in place that hopefully will get them to engage more so that they will start to help us in this process."

Republican senators have proposed legislation to curb Mr Trump's authority to impose tariffs, but they have not targeted the emergency powers law that he is proposing to use in this case.

Despite these efforts, there is little hope that such legislation could overcome a presidential veto in the Senate and the House, where Mr Trump has strong support among Republicans.

Instead, Senate staff aides were hopeful that Mexico could find a way to appease Mr Trump or that the threat could dissipate, as the idea of closing the south-western border did this year.

Since the announcement, Mr Kushner, who worked with the Mexicans to secure concessions in the new trade pact, has been trying to cool tensions and has held calls with Mexico's foreign minister, Mr Marcelo Ebrard.

On Wednesday, Mr Ebrard is expected to meet Secretary of State Mike Pompeo in Washington.

But the clock is ticking, and the administration has not offered clear guidelines for what would constitute a resolution that would forestall the tariffs. In a call with reporters last Thursday night, Mr Trump's acting chief of staff Mick Mulvaney said that determining what would be a sufficient response from the Mexican government would be at the White House's discretion.

"We are going to judge success here by the number of people crossing the border, and that number needs to start coming down immediately in a significant and substantial number," Mr Mulvaney said.