WASHINGTON (REUTERS) - President Donald Trump is moving to replace his deputy national security adviser after she feuded with first lady Melania Trump, two sources familiar with the matter said, with a spokeswoman for the first lady leaving no doubt about where she stood on the matter.

The first lady complained to the president that she was unhappy with how she was being treated by Mira Ricardel, a former Boeing executive who worked on the Trump presidential campaign and was picked by National Security Adviser John Bolton to be his deputy earlier this year, two sources told Reuters.

“It is the position of the Office of the First Lady that she no longer deserves the honour of serving in this White House,” Grisham said.

Sources said that Melania Trump explicitly asked the president to oust Ricardel after their dealings over the Africa trip “didn’t go well”.

The other source said that Melania Trump felt that Ricardel tried to short-change the first lady in terms of US government resources allocated to support her Africa tour.

The sources did not elaborate on the clash over resources. 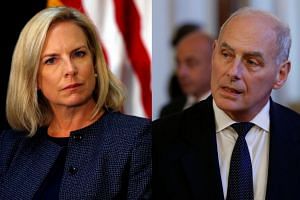 The White House and the National Security Council (NSC) did not respond to requests for comment.

Ricardel could not be reached for comment. She had a prominent place standing to Trump’s right on Tuesday (Nov 13) at a White House ceremony in the Roosevelt Room marking Diwali, the Hindu festival of lights.

A source familiar with Ricardel’s White House performance said Ricardel also ran afoul of much of the NSC staff and “sort of alienated everyone” except for Bolton, the veteran conservative foreign policy expert who has been her immediate superior.

Bolton is currently travelling in Asia with Vice-President Mike Pence.

One of the sources familiar with the White House intrigue said the tensions began building to a crisis point about a month ago and serious, but apparently unsuccessful, efforts were made to defuse the dispute.

Ricardel was also believed to have had a dislike of Defence Secretary Jim Mattis, current and former officials have told Reuters.