WASHINGTON (BLOOMBERG) - United States President Donald Trump looks to be preparing for a potentially protracted economic war with China by clearing the decks of disputes with America's other trading competitors.

In just the last few weeks, he's struck a last-minute deal with Canada and Mexico, signed a trade agreement with South Korea and convinced Japan to begin bilateral economic negotiations. The North American accord also includes provisions seemingly aimed at keeping Chinese products out of the region.

Said Mr Dec Mullarkey, managing director for Sun Life Investment Management which oversees US$47 billion (S$64.6 billion) in assets: "Several months ago the US had a multi-pronged attack on its trading partners.

"Now the US can zero in on China."

That's good news and bad news for the global economy.

On the plus side, it suggests that Mr Trump is not an ultra-isolationist who's opposed to all types of trade. As economists from JPMorgan Chase & Co. see it, the president is holding back from launching a "war on trade" that could upend the world economy.

But he is embarking on a trade war with China that will take a bite out of both countries' economies next year and raise the risk of a broad pullback in global business confidence, they said in a research note. 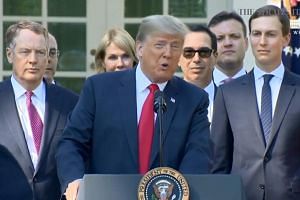 "It's too early to talk" with China, Mr Trump said on Monday (Oct 1) in announcing the new pact with Canada and Mexico at the White House.

US negotiators clearly had China in mind when they hammered out the new trade deal with Mexico and Canada to replace the 1994 North American Free Trade Agreement that Trump labelled a disaster.

The agreement's rules of origin, which govern how much value of a car needs to be made in the region, have been touted by the Trump administration as a tool to keep out Chinese inputs and encourage production and investment in the US and North America.

"The blunt protectionist stick used by this administration may end up creating a coalition of major trading partners that will be difficult for Chinese carrots to compete with."

The revised agreement also requires the three nations to give three-months' notice if they start trade negotiations with a "non-market economy," an indirect reference to China. The US can terminate its pact with Mexico or Canada if either of them strikes a deal with a non-market economy.

Canadian Foreign Minister Chrystia Freeland on Monday downplayed the importance of the provision, saying the countries could always terminate the agreement if they wanted to. That is "a possibility which exists no matter what," she told reporters in Ottawa.

The US-Mexico-Canada Agreement, or USMCA, also prohibits its members from seeking to boost their economic competitiveness by devaluing their currencies, something Mr Trump has accused China of doing in the past.

By settling on a deal with America's neighbours - and beginning talks with allies Japan and the European Union - Mr Trump is strengthening his negotiating position vis-a-vis strategic competitor Beijing.

"The next step will be to bear down on China with a broader coalition," said Mr David Hensley, director of global economics for JPMorgan Chase in New York, noting that other countries share America's concerns about Beijing's alleged unfair trade practices and mercantilism.

The trade ministers of the US, the European Union and Japan issued a joint statement last week squarely aimed at China, pledging to "address non market-oriented policies and practices of third countries" and condemning the theft of intellectual property from multinational corporations.

"If the US were to strike new deals with its major trading partners, many of which are also key trading partners of China, Beijing could feel increasingly cornered," said Mr Eswar Prasad, a former China expert at the International Monetary Fund who now teaches at Cornell University.

Mr Terry Haines, head of political analysis for Evercore ISI, said in a note to clients on Monday that his base case is that the US and China won't strike an agreement until 2019 at the earliest.

"But the new Nafta deal does show China and others that the Trump administration is willing to conclude new trade deals as long as they address core US concerns," he said.

That though may be difficult for Beijing to do. That's because the Trump administration is pressing for major changes in the way China manages its economy via subsidies and government-directed industrial policy.

"The things they're asking for are pretty much unattainable," said Mr Phil Levy, senior fellow on global economy at the Chicago Council on Global Affairs and a former trade economist in George W. Bush's Council of Economic Advisers.

Mr Trump himself seemed to allude to the difficulties ahead in his comments to reporters on Monday.

"They do whatever they want," he said, referring to Beijing, adding: "We have a lot of catching up to do with China."

HIGHLIGHTS OF THE PACT

1 More car production in US

Nafta required automakers to produce 62.5 per cent of a vehicle's content in North America to qualify for zero tariffs. The new agreement raises that threshold over time to 75 per cent. That is meant to force automakers to source fewer parts for an "Assembled in Mexico" (or Canada) car from Germany, Japan, South Korea or China. For the first time, the agreement also mandates that an escalating percentage of parts for any tariff-free vehicle, topping out at 40 per cent in 2023, must come from a "high-wage" factory.

US President Donald Trump's threat of auto tariffs has clouded trade talks with several countries, including Japan and South Korea, which import cars and car parts into the US.

Canada and Mexico will not have to sweat it, though. The new agreement includes side letters that grant exemptions from any future US tariffs to 2.6 million imported passenger vehicles from each of those countries. That is slightly more vehicles than Mexico has exported to the US over the last year and nearly one million more than Canada has exported.

3 Wins for US cheese, wine

Canada agreed to eliminate a programme that helps the country's sellers of certain milk products at home and abroad.

It also creates a list of cheese names that Mexico and the US agree can be marketed without restriction in their respective countries, and forces grocery stores in British Columbia to stop their practice of selling British Columbia-only wines on certain shelves and stock US wines alongside them.

Trade agreements typically come with enforcement mechanisms. As part of its renegotiation efforts, the US sought to eliminate one of those mechanisms in Nafta: the so-called Chapter 19 provision, which gives the three countries a sort of neutral playing site - a panel with representatives from each country - to challenge one another's impositions of tariffs and other actions. Canada won the fight to keep that provision in the revised agreement. It did agree to eliminate another form of enforcement between the US and Canada, which allows investors to sue for relief from foreign countries' actions.

Among the small-but-significant items in the new agreement is a measure to push Mexico to make it easier for workers to form and join labour unions, and steps to allow US financial services companies better access to Canadian and Mexican markets.