PALM BEACH, UNITED STATES (AFP) - US President Donald Trump gave his blessing to talks aimed at formally ending the war on the Korean peninsula on Tuesday (April 17), setting the stage for a major diplomatic breakthrough at a series of upcoming summits.

With a rare inter-Korean meeting 10 days away, and Mr Trump's own landmark sit-down with North Korean leader Kim Jong Un still eyed by early June, the US President opened the door to a peace treaty that has eluded diplomats for more than half a century.

"North Korea is coming along," Mr Trump said confidently as he hosted Japanese Prime Minister Shinzo Abe at his Mar-a-Lago resort in Florida.

"South Korea is meeting and has plans to meet to see if they can end the war and they have my blessing on that," said Mr Trump.

"People don't realise the Korean War has not ended. It's going on right now. And they are discussing an end to the war."

Mr Trump appeared to confirm that North and South Korean talks on April 27 will touch on a possible peace treaty - a deeply symbolic replacement to the more ad-hoc armistice signed in 1953. 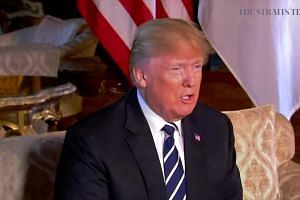 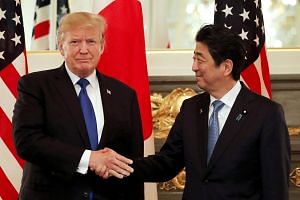 The statement is expected to be part of a joint declaration that the two leaders will adopt when they meet on April 27, said Moon's chief of staff, Im Jong Seok.

Negotiators from both Koreas have agreed on a rough framework for the joint declaration, Im said. Kim told South Korean envoys last month he would be willing to discuss giving up his nuclear weapons if his government no longer felt threatened militarily and its security was guaranteed.

"Although the special envoys have already confirmed a willingness to denuclearise, it will make a difference if the two heads of state will meet and more clearly confirm it and make it a formal statement," Im told reporters on Tuesday.

The US-led United Nations command, China and North Korea are signatories to the half-a-century-old accord, but most experts agree South Korea would likely have to be a signatory to any successor agreement.

Turning to his summit with Mr Kim, Trump revealed "five locations" were being considered.

"That will be taking place probably in early June or before that, assuming things go well," he said.

"It's possible things won't go well and we won't have the meetings and we'll just continue to go on this very strong path we have taken," Mr Trump added.

Officials say that no decision has yet been made, but China, North Korea, South Korea, and Panmunjom in the Demilitarised Zone between the two countries are seen as possible locations.

Panmunjom was the site of the signing of the Korean Armistice Agreement in 1953 and will be the location of the April 27 summit between Mr Kim and South's President Moon Jae In.