WASHINGTON (WASHINGTON POST) - The Trump administration is poised to issue this week an executive order to secure American telecommunications networks, a move that's likely to result in barring Chinese tech firms such as Huawei, according to three US officials.

The order, which President Donald Trump is expected to sign by Friday (Feb 15), would give the commerce secretary broad powers to stop American companies from doing business with foreign suppliers.

In development for more than a year, it will lay out the administration's concern that foreign-owned or controlled suppliers of equipment and services could compromise the security of the United States' phone and Internet infrastructure.

The pending announcement comes as US officials continue to press their case with allies and foreign countries that companies such as Huawei, which has close ties to the Chinese government, pose considerable risk to burgeoning high-speed telecom networks - what's known as 5G.

Officials cautioned that last-minute snags could delay the new order, which has been anticipated since last summer. But they stressed that any holdups are not related to ongoing, high-level trade talks between Washington and Beijing aimed at ending the two countries' months-long trade war.

"This is a national security issue, not a trade issue," said one US official, who like two others interviewed for the story, spoke on the condition of anonymity to discuss internal deliberations.

"We're not doing this to increase the leverage (with China). This is on a separate track." 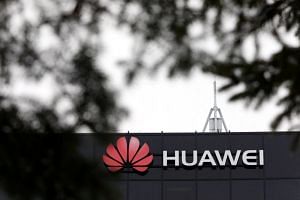 The White House and Commerce Department declined to comment. Huawei did not immediately respond to a request for comment.

The order, whose existence in draft form was first reported by The Washington Post in June, will not ban specific companies or countries, officials said. But the regulations that result from the order, depending on how they are written, may have an outsize impact on China and Chinese-made technology, which US officials have come to view with increasing alarm.

"This is crossing the Rubicon - asserting government power to block commercial transactions," said Clete Johnson, a former senior cybersecurity adviser at the Commerce Department and now a partner at Wilkinson Barker Knauer.

"Just the authority itself could have enormous long-term implications in the US and global markets, and in US-China relations."

US security officials have long voiced concerns about foreign risks to the nation's telecom networks, especially as advanced technologies have introduced vulnerabilities that make such systems more attractive targets for espionage and sabotage.

China in particular has raised concern as it is the United States' near peer in cyber prowess and its top competitor in the race for global technological dominance.

The Trump administration, building on its predecessor's actions, has become increasingly vocal in calling out Beijing for what officials describe as a long-running campaign of economic espionage and of forced technology transfers.

It has brought criminal indictments against state-sponsored hackers and publicly labeled China an economic predator that seeks to unfairly obtain advanced American technology.

Also troubling to US officials is a 2017 law requiring Chinese firms to cooperate with Chinese intelligence services.

Major telecom companies such as AT&T and Verizon already bar Huawei equipment from their core networks, a response to concerns raised years ago by US intelligence agencies. But officials say that issuing the executive order now is a way to show the world that the United States is leading by example, taking decisive measures to protect the telecom supply chain.

"People look to the United States to see what kind of model we're following," the official said.

"It's important for the rest of the world to see that we're doing this in a transparent way, using this as part of regulation."

In issuing the order, Trump is expected, under authorities granted by the International Emergency Economic Powers Act, to declare a national emergency with respect to the supply-chain threat.

The Commerce Department, in consultation with the State and Homeland Security departments, will then have several months to develop rules needed to carry out the policy, though there may be interim guidance, officials said.

US officials want the order finalised before they travel later this month to the Mobile World Congress in Barcelona, where they are expected to renew calls to secure the international telecom supply chain.

On Monday, Secretary of State Mike Pompeo, who is travelling in Europe, said the United States has a duty to alert other countries to the risk of using Huawei equipment.

Speaking in Hungary, he warned that doing so "makes it more difficult for us to partner alongside them."

Even if US carriers refrain from using Huawei or other foreign suppliers' components, their networks connect with other countries' systems, which might employ Huawei parts, said Suzanne Spaulding, a former senior Homeland Security official and now a senior adviser at the Center for Strategic and International Studies.

"Simply trying to prohibit insecure components is not the solution," she said. "Rather, we need to be developing ways to be more resilient, to detect those components that have security risks and mitigate those risks."

Trump's expected order would come about 11 months after the Federal Communications Commission opened debate on proposed rules that could have the effect of banning equipment from Huawei and other Chinese telecom giants.

The pending regulations target a nearly US$9 billion federal fund for expanding high-speed internet access to the country's hardest-to-reach areas.

Providers would lose access to the funds if they buy their equipment from companies "posing a national security threat," FCC Chairman Ajit Pai said in April, without explicitly mentioning Huawei or China.

Huawei nonetheless said it had been "artificially restricted" in the United States by "unfounded allegations and suspicions based solely on misperceptions about Huawei's relationship with the government of China."

Rural broadband providers - many of which rely on the US government's aid to build and sustain their networks - have expressed concern about the pending executive order and the FCC's efforts.

The Rural Wireless Association, a lobbying association for the carriers, told the FCC that its members rely on Huawei equipment because it is less expensive. The group has said carriers' networks could become "collateral damage in a larger national security and trade debate."