WASHINGTON (REUTERS) - President Donald Trump’s former campaign chairman Paul Manafort was sentenced to about three and a half  more years in prison and was hit with a fresh set of criminal charges in New York on Wednesday (March 13), drawing sympathy from a president who declined to say whether he would issue a pardon.

Manafort, 69, is due to spend six years and nine months behind bars when the sentence issued by US District Judge Amy Berman Jackson for crimes related to secret lobbying and witness tampering is combined with another sentence issued by a different judge in Virginia last Thursday.

Manafort, who has already served nine months behind bars, has received the longest prison sentence yet in Special Counsel Robert Mueller’s investigation of possible collusion between the Trump campaign and Russia during the 2016 presidential election.

During the sentencing hearing, Jackson lectured Manafort over his lies and criminal behavior after he made a plea for leniency.

Just minutes after Jackson read her sentence, the Manhattan district attorney unveiled a separate indictment charging Manafort with residential mortgage fraud and other New York state crimes, which unlike the federal charges cannot be erased by a presidential pardon.

Trump, who in November said he had not ruled out giving Manafort a pardon, on Wednesday said that “I have not even given it a thought.”

“It’s not something that’s right now in my mind. I do feel badly for Paul Manafort – that I can tell you,” the Republican president told reporters at the White House.

Jackson told Manafort that he had lied repeatedly and committed fraud repeatedly, and there was no good explanation for the leniency he sought.

“Saying ‘I’m sorry I got caught’ is not an inspiring plea for leniency,” Jackson told Manafort, who was brought into the courtroom in a wheelchair because of a condition called gout.

Jackson could have given Manafort up to 10 years in prison in the Washington case – five for each of the two conspiracy counts.

Manafort’s lawyers have noted that the charges that are sending him to prison are related to his work as an international political consultant and lobbyist, not his time with the Trump campaign. They have also said the case does not prove that the campaign worked with Russia to help Trump win the election.

“But for a short stint as a campaign manager in a presidential election, I don’t think we’d be here today,” Manafort lawyer Kevin Downing told Jackson.

Jackson suggested that argument was aimed at winning a pardon from Trump.

“The ‘no collusion’ mantra is simply a non sequitur that does not bear on the question of the appropriate sentence,” she said.

Jackson added that Mueller’s investigation, which is ongoing, could yet reveal that Manafort worked with Russian interests during the campaign. 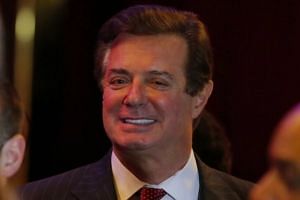 The charges unsealed in New York on Wednesday spelled more legal trouble for Manafort. The 16-count indictment accused Manafort and others of falsifying business records to fraudulently obtain millions of dollars in mortgages. The allegations appeared to mirror some of the fraud charges in his Virginia trial.

“No one is beyond the law in New York,” District Attorney Cyrus Vance, a Democrat, said in a statement.

Mueller is preparing to submit to US Attorney General William Barr a report on his investigation into whether Trump’s campaign conspired with Russia and whether Trump has unlawfully sought to obstruct the probe. Trump has denied collusion and obstruction and Russia has denied US intelligence findings that it interfered in the 2016 election in an effort to boost Trump.

In the Washington case, Manafort was sentenced for two conspiracy counts to which he pleaded guilty last September.

“I am sorry for what I have done and for all the activities that have gotten us here today,” Manafort told Jackson.

“This case has taken everything from me already – my properties, my cash, my life insurance, trust accounts for my children and grandchildren, and even more,” Manafort added.

Jackson ruled on Feb 13 that Manafort had breached his agreement in the Washington case to cooperate with Mueller’s office by lying to prosecutors about three matters pertinent to the Russia probe including his interactions with a business partner they have said has ties to Russian intelligence.

Manafort wore a dark suit and tie to the hearing. At last week’s sentencing, Manafort wore a green prison jumpsuit emblazoned with the words “Alexandria Inmate” on the back.

Mueller is preparing to submit to US Attorney-General William Barr a report on his investigation into whether Trump’s campaign conspired with Russia and whether Trump has unlawfully sought to obstruct the probe. Trump has denied collusion and obstruction and Russia has denied US intelligence findings that it interfered in the 2016 election in an effort to boost Trump.