WASHINGTON (AFP) - United States President Donald Trump denied on Wednesday (April 18) having fired FBI director James Comey a year ago over the investigation into links between his election campaign and Russia.

Trump made the denial as a new book by Comey added fuel to allegations that Trump may have engaged in criminal obstruction of justice when he dismissed Comey on May 9, 2017.

"Slippery James Comey, the worst FBI Director in history, was not fired because of the phony Russia investigation where, by the way, there was NO COLLUSION (except by the Dems)!" Trump said via Twitter early on Wednesday.

Officially, Comey was fired based on the recommendation of Trump-appointed Deputy Attorney General Rod Rosenstein.

But in an interview with NBC News two days after the firing, Trump made clear the letter was not the real reason, and suggested that the Russia probe was behind his thinking.

"Regardless of recommendation, I was going to fire Comey," he said.

"In fact, when I decided to just do it, I said to myself, you know, this thing with Trump and Russia is a made-up story, an excuse by the Democrats for having lost an election." "As far as I'm concerned, I want that thing to be absolutely done properly," he added. 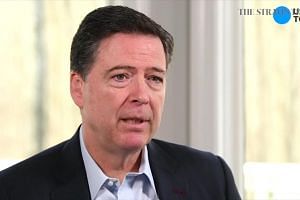 "In my opinion, it should've been over with a long time ago because all it is an excuse." That statement, together with Trump's later attacks on Comey and the Justice Department's Special Counsel Robert Mueller, now the head of the Russia investigation, have stoked accusations by Democrats and some legal experts that Trump has sought to stifle the probe.

Comey's memoir released on Tuesday, A Higher Loyalty: Truth, Lies and Leadership, describes conversations he had with Trump before he was fired in which the president seemed to pressure him over the Russia investigation.

But Comey has refrained from accusing Trump of obstruction, saying in an interview with National Public Radio on Tuesday that he did not have the full picture of Mueller's probe to be able to make that judgement.

Mueller, meanwhile, has been silent on the direction of his nearly year-long investigation, but media reports citing people informed on the probe say it has widened from allegations of collusion between the Trump campaign and Russia to include possible obstruction.

Concern over McCain's questions at hearing