WASHINGTON (NYTIMES) - President Donald Trump on Monday (June 24) again denied assaulting a columnist for Elle magazine in the dressing room of a high-end clothing store more than 20 years ago, asserting just hours after she aired her explosive accusation on television that he would not have assaulted her because "she's not my type".

Mr Trump said that Ms E. Jean Carroll, who wrote for years for Elle magazine, was "lying" when she said that he threw her up against a wall and forced himself on her in the mid-1990s, and he insisted that he did not know her.

"I'll say it with great respect," he said in an interview with The Hill, a Capitol Hill news organisation. "No. 1, she's not my type. No. 2, it never happened. It never happened, OK?"

Earlier on Monday, Ms Carroll spoke publicly for the first time since an excerpt from her new book - What Do We Need Men For? - was published in New York magazine.

She said in an interview on CNN that Mr Trump threw her up against a wall so hard that "I hit my head really hard: boom".

She said that she tried to fight back against Mr Trump's violent advances in a fitting room of Bergdorf Goodman in Manhattan.

In the Hill interview, Mr Trump said Ms Carroll was making up the story.

Mr Trump in the past has rejected other sexual assault accusations by asserting that the women who accused him of taking advantage of them were not attractive enough to engage in such behaviour.

"Believe me, she would not be my first choice, that I can tell you," Mr Trump told supporters at a campaign event in 2016 after a woman accused him of putting his hand up her skirt while on an airplane.

"You don't know. That would not be my first choice."

As the crowd laughed, he said, "Check out her Facebook, you'll understand." 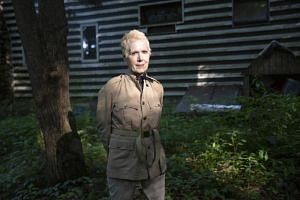 Writer accuses Trump of sexual assault more than two decades ago, an allegation he denies

Adult film actress accuses Donald Trump of offering her $14,000 to come alone to his hotel suite

The fitting room episode took place in late 1995 or early 1996, according to Ms Carroll, who said on Monday that Mr Trump asked her to model lingerie that he was looking to purchase. At the time, Mr Trump was married to Ms Marla Maples.

"The minute he closed that door, I was banged up against the wall," Ms Carroll said during an appearance on New Day with Ms Alisyn Camerota.

"I want women to know that I did not stand there. I did not freeze. I was not paralysed, which is a reaction I could have had because it was so shocking. No, I fought."

Ms Carroll said the release in October 2016 of the Access Hollywood video in which Mr Trump boasted of sexual assault to television host Billy Bush was validation for her.

CNN played the 2005 clip during Ms Carroll's appearance on Monday.

"It knocked me back; I felt relief," Ms Carroll said. "We have to change this culture of sexual violence."

More than a dozen women have accused Mr Trump of sexual misconduct that they said took place before he was elected president.

"It's the same," Ms Carroll said. "He denies it. He turns it around. He attacks and then he threatens. I am sick of it. Think how many women have come forward. Nothing happens."

Ms Carroll, 75, stopped short of using the word "rape" on Monday to characterise the episode, which she said in the New York magazine excerpt that she disclosed to two friends at the time.

One urged her to report it to the police, while a journalist friend warned her to keep quiet because Mr Trump would "bury you".

The New York Times spoke to the two friends, who confirmed that Ms Carroll had spoken about it with them but said they did not want to be identified.

"I have difficulty with the word," Ms Carroll, the author of Ask E. Jean in Elle, said on Monday. "I see it as a fight. He pulled down my tights. It was over very quickly. It was against my will 100 per cent."

Ms Carroll rejected the President's contention that she was motivated by publicity for her book.

"Male authors never get this question," Ms Carroll said. "It was not about selling a book about Donald Trump."

In a statement on Friday, the President said he had never met Ms Carroll, but the two were photographed together at a party in 1987 with Ms Carroll's former husband, Mr John Johnson.

Mr Trump said on Saturday that the image was misleading.

"Standing with my coat on in a line?" Mr Trump said. "Give me a break - with my back to the camera? I have no idea who she is."