HELSINKI (NYTIMES) - President Donald Trump stood next to President Vladimir Putin of Russia on Monday (Jul 16) and publicly challenged the conclusion of his own intelligence agencies that Moscow interfered in the 2016 presidential election, wrapping up what he called a "deeply productive" summit with an extraordinary show of trust for a leader accused of attacking American democracy.

"They said they think it's Russia; I have President Putin, he just said it's not Russia," Trump said, only moments after the Russian president conceded that he had favoured Trump in the election because of his promises of warmer relations with Moscow.

"I will say this: I don't see any reason why it would be" Russia that was responsible for the election hacking, Trump added. "I have great confidence in my intelligence people, but I will tell you that President Putin was extremely strong and powerful in his denial today."

The 45-minute news conference offered the remarkable spectacle of the American and Russian presidents both pushing back on the notion of Moscow's election interference, with Putin demanding evidence of something he said had never been proved and Trump appearing to agree.

When asked directly whether he believed Putin or his own intelligence agencies, Trump said there were "two thoughts" on the matter and then changed the subject, demanding to know why the FBI never examined the hacked computer servers of the Democratic National Committee and asking about the fate of emails missing from the server of Hillary Clinton, his campaign rival.

“Where are those servers?” Trump said. “Where are Hillary Clinton’s emails?”

His performance drew howls of protests from Democrats and some Republicans, prompting John Brennan, who served as CIA director under President Barack Obama, to suggest that the remarks warranted Trump's impeachment.

Donald Trump’s press conference performance in Helsinki rises to & exceeds the threshold of “high crimes & misdemeanors.” It was nothing short of treasonous. Not only were Trump’s comments imbecilic, he is wholly in the pocket of Putin. Republican Patriots: Where are you???

"Not only were Trump's comments imbecilic, he is wholly in the pocket of Putin."

House Speaker Paul Ryan released a statement saying, “there is no question that Russia interfered in our election and continues attempts to undermine democracy.”

Asked by an American reporter whether he had wanted Trump to win and directed an effort designed to bring about that result, Putin quickly answered: “Yes I did, yes I did, because he talked about bringing the US-Russia relationship back to normal.”

It was not clear whether he had heard the translation of the second part of the question.

Trump will meet members of Congress on Tuesday, the White House said, in the wake of the barrage of criticism. The White House did not say who would attend the meeting or its subject. It is the only event on Trump’s schedule for Tuesday.

Trump’s statements were a remarkable break with his administration, which on Friday indicted 12 Russian intelligence officers for cyberattacks intended to interfere in the presidential contest. The indictment explained, in detail, how Russian intelligence officers hacked the Democratic National Committee and the Clinton presidential campaign, providing the most explicit account to date of the Russian government’s meddling in US democracy.

Putin said he would look into the possibility of having Russian law enforcement authorities assist Robert Mueller, the special counsel investigating Moscow’s election interference, in questioning the 12 people who were charged.

But in return, Putin, who rolled his eyes and snickered at the notion that he had compromising material on Trump or his family, said that Russia in return would request US assistance in cases of interest to Moscow, including the ability to send Russian law enforcement officials to work in the United States.

He brought up William F. Browder, a long-standing critic of the Kremlin whose associates Putin accused of evading taxes and funneling millions of dollars to the Clinton campaign.

Putin also took solace in Trump’s doubt-casting about who was responsible for the hacking, saying the allegations that Russia had directed the effort were “utter nonsense, just like the president recently mentioned.”

Emerging from his meeting with Putin, which was followed by a larger lunch meeting with advisers, Trump cited a litany of factors that he said had stood in the way of better relations between the United States and Russia. He blamed Democrats’ bitterness over having lost an election they should have won and Mueller’s investigation, which the president once again branded a “witch hunt.”

But Trump claimed to have defused all of that tension in a matter of minutes.  “Our relationship has never been worse than it is now,” Trump said. “However, that changed as of about four hours ago.”

Trump began his day Monday on Twitter, blaming US “foolishness and stupidity” for years of escalating tension with Russia, as well as the “Rigged Witch Hunt,” his term for Mueller’s probe. The comment appeared to absolve Moscow of many irritants in the relationship with Russia, including the election hacking, the annexation of Crimea, Russian backing for rebels in Ukraine and for the Assad regime in Syria, and Moscow’s suspected use of a nerve agent to poison people in Britain.

In fact, Russia’s Foreign Ministry recirculated the comment, chiming in, “We agree.”

In the United States, critics of Trump reacted quickly to the day’s events. Senator Ben Sasse, R-Neb., responded sharply to Trump’s statement that Russia and the United States shared blame for their deteriorated relationship.

“This is bizarre and flat-out wrong,” he said in a statement. “The United States is not to blame. America wants a good relationship with the Russian people, but Vladimir Putin and his thugs are responsible for Soviet-style aggression. When the president plays these moral equivalence games, he gives Putin a propaganda win he desperately needs.” Ryan said, “There is no moral equivalence between the United States and Russia, which remains hostile to our most basic values and ideas.”

The summit capped a weeklong European trip in which Trump disparaged Nato allies, castigated Germany as a captive of Russia, criticized the British prime minister on her own soil and branded the European Union a “foe,” while musing about his wish for warmer relations with Putin, whom his government considers a potentially dangerous adversary to be countered.

As Putin and Trump emerged from a longer-than-expected set of talks that included a 130-minute one-on-one session with no advisers present, they said they had made progress in forging the bond both were seeking.

“We had direct, open, deeply productive dialogue,” Trump said. “It went very well.” Putin said the two were “glad with the outcome of our first full-scale meeting,” adding, “I hope that we start to understand each other better and I’m grateful to Donald for it.”

The explosive news conference followed a closely scrutinised meeting in this nation that shares a long border with Russia and has been the site of past diplomatic breakthroughs, although this round of talks appeared to have produced none. 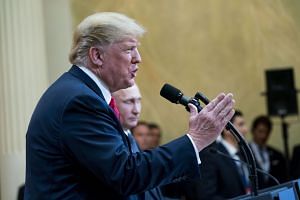 Instead, the talks underscored the degree to which Trump is redefining the United States’ posture in the world, alienating allies and embracing adversaries according to his own priorities and concerns.

The two presidents said they would work together on nuclear arms control, although neither mentioned a concrete set of actions on forging a new treaty to replace the New START treaty, which is set to expire in 2021 or addressing what US officials have said are Russian violations of the Intermediate-range Nuclear Forces Treaty.

The two also discussed working together on Syria, where Russia is backing the government of Bashar Assad, who has used chemical weapons against his own people in a civil war that has raged for nearly eight years, and where the United States badly wants Putin to curtail Iran’s influence.

Trump said he had directly confronted Putin on the election interference, calling it “a message best delivered in person,” but he pivoted almost immediately to criticism of Mueller’s probe and a recitation of his success in the Electoral College, blaming the investigation – not Russia’s actions – for the inability of two great nuclear powers to work together.

“I think that the probe is a disaster for our country,” Trump said. “I think it’s kept us apart; it’s kept us separated. There is no collusion at all.”

He called Putin’s proposal to potentially allow Russian officials to question the 12 indicted agents with US observers present a “generous offer.”

Peter Carr, a spokesman for the special counsel, had no comment on the idea.