WASHINGTON (AFP) - United States President Donald Trump announced on Friday (Sept 11) a peace deal between Israel and Bahrain, which becomes the second Arab country to settle with its former foe over the past month, reinforcing an ambitious White House push to redraw the conflicts of the Middle East.

"They will exchange embassies and ambassadors, begin direct flights between their countries and launch cooperation initiatives across a broad range of sectors, including health, business, technology, education, security and agriculture," he told reporters.

Bahrain said in a joint statement it had agreed to formalise the deal with Israel at a ceremony next Tuesday in the White House, where the United Arab Emirates will also sign off on its own thaw with Israel announced in mid-August.

Bahrain said that during the phone call, the king "stressed the need to reach a just and comprehensive peace as a strategic option, in accordance with the two-state solution and relevant resolutions of international legitimacy".

Until now, Israel has been able to strike just two peace accords with Arab countries - Egypt in 1979 and Jordan in 1994 - and Mr Trump is hoping that the diplomatic successes will give him badly needed momentum going into the Nov 3 presidential election.

At the White House, Mr Trump celebrated, calling the progress "very, very important for not only the Middle East, but for the world."

He said it was "so interesting" that he was able to make the announcement on the anniversary of the Sept 11, 2001 attacks against the United States.

"When I took office the Middle East was in a state of absolute chaos," Mr Trump said. 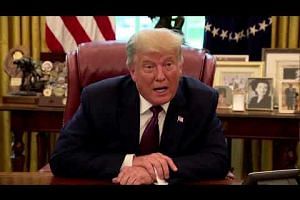 "Citizens of Israel, I am moved to be able to tell you that this evening, we are reaching another peace agreement with another Arab country, Bahrain. This agreement adds to the historic peace with the United Arab Emirates," the Israeli leader said.

In the UAE, Ms Hend al-Otaiba, director of strategic communications at the foreign ministry, sent congratulations to Bahrain and Israel.

"Today marks another significant and historic achievement which will contribute enormously to the stability and prosperity of the region," she said.

"I am very hopeful that there will be more to follow. I can tell you there's tremendous enthusiasm on behalf of other countries to also join," he said.

The Republican businessman has styled himself as the most pro-Israeli US president in history.

He has taken a string of decisions highly beneficial to Israel, from recognising disputed Jerusalem as the country's capital to tearing up an international accord meant to end Iran's isolation in return for verified controls to prevent militarisation of its nuclear industry.

At the same time, Mr Trump has pushed to wind down the US' own military footprint after decades of bloody entanglements in Iraq and elsewhere. His earlier success in getting an Israel-UAE normalisation prompted a right-wing Norwegian member of Parliament to nominate him for the Nobel Peace Prize.

The UAE's announcement broke with years of policy on the Middle East conflict, prompting angry pushback from the Palestinians and Iran.

The Palestinians, who see Arab support as crucial to their limited power in resisting Israeli occupation, quickly condemned the Israel-Bahrain deal as well.

Hamas, which controls the Gaza Strip, said it was an "aggression" that dealt "serious prejudice" to the Palestinian cause.

Iran said the deal made Bahrain a partner to the "crimes" of Israel, its regional arch foe.

It accused Israel of "decades of violence, slaughter, war, terror and bloodshed in oppressed Palestine and the region".

Mr Trump, who has made crushing sanctions and diplomatic pressure on Iran a priority of his administration, predicted however that there would be a "very positive" development in the stand-off with Teheran.

"I can see a lot of good things happening with respect to the Palestinians," he added, arguing that the Palestinians would end their conflict with Israel once enough Arab countries had taken the initiative.

"As more countries normalise relations with Israel, which will happen quite quickly we believe, the region will become more and more stable, secure and prosperous," he said.

"In the meantime, we're pulling our soldiers out, so we're doing it the opposite way. They were doing it with nothing but fighting and blood all over the place," Mr Trump said.