WASHINGTON (BLOOMBERG) - White House communications director Hope Hicks was antagonistic towards Paul Manafort, the now-indicted former campaign manager to US President Donald Trump, during a House Intelligence Committee interview, according to a House official familiar with her testimony.

Hicks was said to tell the panel during a lengthy closed-door session on Tuesday (Feb 27) that if Manafort had gone through the same level of background checks as other Trump campaign aides, he never would have gotten the job of campaign chairman, said the official, who requested anonymity because the session wasn't public.

In her work for Trump, Hicks also was said to tell the panel that she occasionally was required tell "white lies," but later clarified that did not apply to substantive matters, the official said.

The New York Times earlier reported that information about her testimony.

Hicks declined to answer some questions during her interview with the House committee in its investigation of Russian campaign interference in the 2016 US presidential election, lawmakers said after the session.

"We got Bannoned!" said panel Democrat Denny Heck of Washington, in a reference to the previous refusal of former chief White House strategist Steve Bannon to answer some questions. 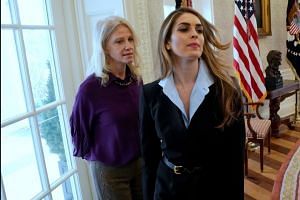 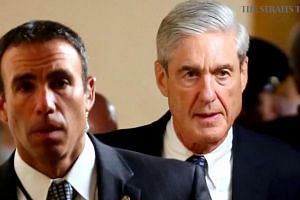 Hicks also lobbed some snarky barbs towards Manafort, said the official, including telling the committee he likely wouldn't have been named to the job if he had gone through the same level of background checks before being named campaign chairman as others on the Trump team.

He said that under instructions from the White House, she declined to answer questions related to the transition period between the election and Trump's inauguration, as well as the time "in the West Wing."

Later in the day, Hicks did answer some questions about the transition, according to Republican Representative Tom Rooney of Florida.

The panel's top Democrat, Adam Schiff of California, said that she began answering some transition-related questions after it became clear she had addressed those topics in an earlier interview she did privately with the Senate Intelligence Committee's probe.

Schiff has said that the committee wanted to know about events and conversations tied to Hicks's role as part of the Trump campaign as well as her current post as a top adviser in his administration.

"We ought to treat this witness like Steve Bannon and she should be subpoenaed," Schiff told reporters after the Hicks interview, saying the White House has suddenly stopped being cooperative with the panel's probe.

"We need to compel answers."

Hicks, who met with the panel voluntarily for about nine hours, didn't speak to reporters.

On Jan 31, the New York Times reported that a former spokesman for Trump's legal team, Mark Corallo, was prepared then to tell Special Counsel Robert Mueller of his concerns over a comment Hicks made during a phone call with him and the President.

According to the Times, Corallo said Hicks said during the call that emails written by Donald Trump Jr about a June, 9, 2016, meeting with Russians at Trump Tower would "never get out."

Corallo was concerned that Hicks might be considering obstructing justice, the Times reported, citing sources. Her lawyer, Robert Trout, denied Hicks made such a statement or suggested documents or emails would be concealed, the Times reported.

Some of the questions, Schiff said, would focus on "what role she may have played in the drafting of that initial false statement about the Trump Tower meeting" to the media last summer. Schiff said that Hicks would be asked to describe what roles the younger Trump, and even the President, had in crafting that statement.

He was referring to reports that during an Air Force One flight from Germany, Trump dictated a statement to Hicks as a initial response for the media to revelations that his eldest son had met with the Russian lawyer during the 2016 campaign.

The statement's assertion that the meeting primarily concerned a programme for adopting Russian children turned out to be false when emails revealed that Trump Jr had agreed to the meeting after being offered dirt on his father's presidential foe, Democrat Hillary Clinton.

Schiff said beforehand that he hoped Hicks would be more forthcoming than former Trump aides Bannon and Corey Lewandowski.

Committee Democrats complained that Bannon gave scripted responses and refused to answer many questions, saying he'd been instructed by the White House to invoke executive privilege. Schiff has called for the committee to consider contempt action against Bannon.

Lewandowski, a former Trump campaign manager, told committee members in his voluntary appearance in January that he wasn't prepared to answer questions about the period after he left the campaign, though he stopped short of asserting executive privilege. He promised to return, but hasn't.