LOS ANGELES (REUTERS) - A US judge on Friday (May 10) said Elon Musk must face a defamation lawsuit by a British diver who said he was falsely branded a pedophile and child rapist by the chief executive of electric car company Tesla Inc.

US District Judge Stephen Wilson in Los Angeles said a reasonable jury could conclude that Musk's comments were more than merely opinions, and scheduled a trial for Oct 22.

The judge had on April 26 denied Musk's bid to dismiss the lawsuit brought by diver Vernon Unsworth, without explaining his reasoning.

Musk's lawyers did not immediately respond on Friday to requests for comment.

Unsworth, who said in his lawsuit he shared a house in the Thailand countryside with a 40-year-old woman who owned a nail salon, was part of a team that helped rescue 12 boys and their soccer coach from a Thailand cave last July 10.

He said he became a target for Musk after saying on CNN that a mini-submarine offered for the rescue by Musk from his company SpaceX, where he is also chief executive, was a "PR stunt" and that Musk could "stick his submarine where it hurts."

Musk later called Unsworth "pedo guy" on Twitter, a comment for which he apologised. He also urged a BuzzFeed News reporter by email to investigate Unsworth and "stop defending child rapists." Unsworth has denied those allegations. 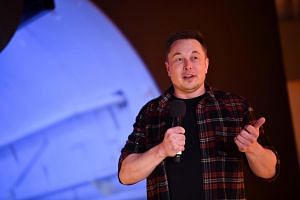 British caver may sue after 'pedo' tweets by Elon Musk

In seeking a dismissal, Musk's lawyers said such comments were "imaginative" or "over-the-top" insults that constituted protected opinion under the US First Amendment.

But the judge said Musk was not communicating in "heated and volatile" settings that might explain any excesses.

Wilson said in a footnote he has not found that reasonable jurors would "necessarily" view Musk's comments as factual.

"The significance of the ruling is clear: publication of accusations on Twitter does not provide a safe harbor for defamatory statements that are false and convey that they are factual," Unsworth's lawyer L. Lin Wood said in an email.

Unsworth is seeking at least US$75,000 in compensatory damages plus punitive damages in his Sept. 2018 lawsuit.

On April 30, a Manhattan federal judge approved Musk's revised settlement with the US Securities and Exchange Commission setting out when Musk must obtain advance approval from a Tesla securities lawyer before posting on Twitter or other social media.