WASHINGTON (BLOOMBERG) - Visiting the USS Gerald R Ford two years ago, US President Donald Trump extolled the importance of an enlarged naval force featuring a dozen aircraft carriers-including the Ford, the most expensive ship ever built.

Having 12 of these behemoths-sometimes accompanied by a half-dozen other ships-would send an international signal of US resolve and restore the fleet to its post-Cold War size during the 1990s.

The Pentagon's latest budget proposal, however, seems to do the opposite.

The Defence Department is seeking to-at least for now-shrink the carrier fleet, proposing that the USS Harry Truman be effectively decommissioned in 2024.

This would mean that a multibillion-dollar, nuclear-powered super-carrier deployed in 2000 would be mothballed two decades before the end of its service life.

The Pentagon plan would skip the vessel's US$6.5 billion (S$8.75 billion) midlife nuclear refueling and overhaul to save funds for other military priorities. The Ford alone costs US$13 billion.

The proposal-which already faces congressional headwinds-would for a time leave the Navy with 10 carriers, one fewer than the congressionally mandated fleet size. 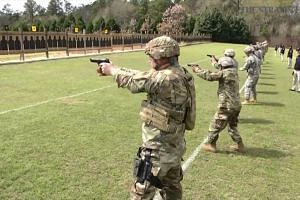 Senator James Inhofe, an Oklahoma Republican and chairman of the Armed Services Committee, signaled last week that he opposes the plan.

"I'm a little disturbed by the idea," he said.

Mr Patrick Shanahan, the acting US Secretary of Defence, said the decision "represents some of the strategic choices we made in this year's budget."

Being forced to choose, however, may prompt Congress to simply find more money to rehabilitate the Truman and move forward with an existing deal to buy a second and third Ford-class carrier.

A similar quandary during the Obama administration was resolved this way. Indeed, there's some question as to whether the Truman proposal is simply a feint: The Navy's new 30-year shipbuilding plan has a section called "Navy The Nation Needs," which includes 12 carriers as part of a desired 355-vessel fleet.

However, the Navy's top budget official said during a fiscal 2020 budget briefing that the service has already spent US$537 million on the two nuclear reactor cores intended for refueling the Truman.

They will now be put in storage as emergency replacements, he said.

If Congress buckles and the Navy gets more money for the Truman, the big winner will be the sole builder of America's carriers: Huntington Ingalls Industries Inc.

With nothing to work on, contractors can be forced to lay off workers and shut down supply chains that are not easily reactivated.

The funding conundrum, however, points up a broader question about how America has ruled the seas since World War II.

With its squadrons of fighter aircraft, the carrier is a military-technical marvel. But rivals have been catching up. Carriers and their strike groups may soon become viable targets for enemy missiles that could overwhelm their defences.

The immediate military threat facing the Navy's carriers is a new generation of ballistic missiles that can be launched far outside the range of most carriers' attack aircraft.

China's Dong Feng 21D, for example, has been dubbed a "carrier killer," due to its range of more than 1,400km. China and Russia are also believed to be developing hypersonic weapons that travel faster than Mach 5, a speed that would virtually guarantee a limited response, if any, from a carrier strike group.

Carriers are also, of course, hugely expensive at a time when America is approaching a US$1 trillion annual deficit. The Navy may spend more than US$58 billion for four Ford-class carriers, including the USS John F Kennedy, which is supposed to be delivered next year, and the USS Enterprise.

The Ford-class vessels are engineered to launch one-third more sorties per day than their predecessors, employing an array of technologies new to the flattop field, which dates to 1922 when the Navy launched the first aircraft from its first carrier.

However, the promises from Huntington subsidiary Newport News Shipbuilding have fallen short, with problems bedeviling a complex electromagnetic launch system and weapons elevators.

The first Ford-class carrier, though listed as one of the 11 active US carriers, was delivered more than a year late, billions of dollars over budget, and it still isn't ready for combat.

Six years ago, the Obama administration also tried to save money and scrap a carrier-the USS George Washington-by forgoing its mid-life refurbishment. Congress balked. Last week, a day after the Pentagon unveiled its budget proposal, Huntington reported that the Washington's overhaul was half finished and set to be completed in 2021.