WASHINGTON (BLOOMBERG) - US President Donald Trump's dinner with Chinese leader Xi Jinping last Saturday (Dec 1) yielded a ceasefire in the trade war between the world's two biggest economies, but the details are proving less than satisfying to those hungering for a lasting truce.

Global stocks slumped on Tuesday (Dec 4) as investors grew sceptical that the US and China made a meaningful breakthrough last Saturday. Trump administration officials struggled to explain the deal, while Beijing has yet to confirm the terms.

"The market wants to see more details before it can make up its mind," said Mr Torsten Slok, chief international economist at Deutsche Bank AG. "It remains unclear for the market whether the trade war will escalate or de-escalate from here."

Here are some of the unanswered questions from the agreement:

1. WHAT EXACTLY WILL CHINA BUY?

It's not clear. In its statement announcing the deal, the White House said China agreed to purchase a "not yet agreed upon, but very substantial, amount of agricultural, energy, industrial, and other product", and will start buying "agricultural product" from American farmers immediately.

Treasury Secretary Steven Mnuchin, on Fox Business Network on Tuesday, put China's trade commitments at US$1.2 trillion (S$1.64 trillion), but said they need to be put "on paper".

But the Chinese statement on last weekend's meeting said only that Beijing agreed to buy more US goods. Even if that happens, there's no guarantee it would reduce the US$336 billion US trade deficit with the Asian nation, as Mr Trump hopes to do.

2. WHAT 'STRUCTURAL CHANGES' IS CHINA WILLING TO MAKE?

The two sides have given themselves 90 days to negotiate "structural changes" in the way China handles technology transfer, intellectual property protection, cyber theft and other issues.

That's a narrow window in which to solve some of their thorniest differences.

The US alleges China forces American companies to cough up sensitive technologies and steals IP in order to modernise its economy. Trump officials are putting pressure on Beijing to tone down its ambitions to lead in emerging industries such as artificial intelligence, a compromise for which Mr Xi has shown no appetite.

White House economic adviser Larry Kudlow said on Monday that the US and China are "pretty close" to an agreement on stopping IP theft, though he didn't give any details on the progress.

If the US can extract concessions here, it could form the basis of a sustainable deal. Trouble is, Beijing has shown little interest in anything but making incremental changes. 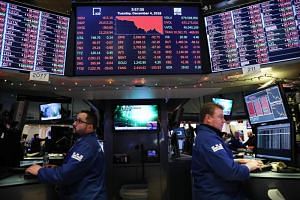 US stocks end down more than 3% on trade, growth worries

3. WHAT ARE THE NEXT STEPS IN THE TALKS?

According to Mr Trump, the 90-day clock started ticking following his "wonderful and very warm dinner" with Mr Xi.

Even before the dinner, there were preparations under way for Chinese Vice-Premier Liu He to lead a follow-up round of negotiations, possibly this month in Washington. The US point man will be Trade Representative Robert Lighthizer.

Mr Lighthizer is a longstanding critic of China, which he argues hasn't delivered on the pro-market reforms it promised when it joined the World Trade Organisation in 2001.

But he has shown a pragmatic streak, striking deals with South Korea as well as Mexico and Canada that were less restrictive than business leaders feared.

4. WHAT IS CHINA SAYING?

Not what the US is saying, and that's not a good sign.

Beijing, for example, didn't mention the 90-day deadline for talks on a deal over technology issues. The Chinese said the US agreed to more market access, which the White House didn't refer to in its statement.

China's government isn't yet able to formulate its response to the summit on trade with Mr Trump, as senior officials are still out of the country with Mr Xi this week, according to three officials who were briefed but declined to be named, as the matter isn't public.

US promises are already unravelling. Mr Kudlow said on Tuesday that the White House doesn't have a deal with China to cut car tariffs, backtracking from a tweet by the President two days earlier.

5. HOW LIKELY IS THIS TO END THE TRADE WAR?

Investors seem to increasingly doubt it. After all, US-China detentes have disintegrated before.

In May, Mr Trump disavowed a joint statement the two countries agreed to in Beijing that made vague pledges for China to buy more agriculture and energy exports.

One reason for optimism: Mr Trump has now stamped his personal brand on US-China economic relations.

That gives him a strong political incentive to ensure talks don't fail, as he girds for the next presidential election in 2020.

But China is showing little indication it would accept a major overhaul of its state-driven system, a move that economists say would be necessary to even out the trade imbalance that Mr Trump scorns.

If negotiations sputter, Mr Trump has his finger on the trigger, as he made clear in a tweet on Tuesday: "I am a Tariff Man."